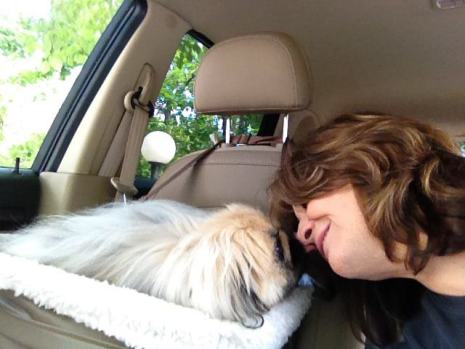 Jodi Cotten and Noki prepare for a road trips to restrain their pets when the pets are
travelling with them in the car. The law carries stiff fines for drivers
who don't comply, ranging from $250 to $1000.

Controversy surrounds the law as some feel that the law is going too far and is encroaching on individual rights and is evidence of a "totalitarian nanny state." However, the sudden movements of pets in the car have been known to cause deadly accidents for both humans and pets. (Source: Yahoo News)

While Rhode Island and Oregon are considering the same legislation, in Hawaii it is already illegal to drive with your pet in your lap, and in Arizona, Connecticut, and Maine drivers can already be ticketed for pets in their laps under distracted-driving laws. (Source: ABC News) 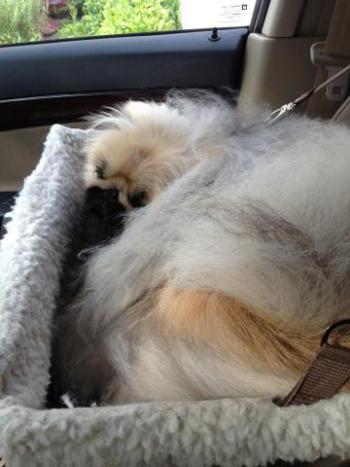 Noki the Pekingese is comfy in his car seat

New York resident Jodi Cotten told PetsLady.com that she has been putting her beloved  Pekingese, Noki,  in a car seat for more than a year now, so they are both ready for those frequent trips into New Jersey. From his car seat Noki can still look out the window and enjoy the ride while they both stay safe. The car seat is adjustable to maximize Noki's riding comfort by allowing Jodi to select the right height for the seat. There is a hook in the back of the seat that latches onto his collar. The decision to buy the seat was not a hard one for Jodi. "I had to stop on a dime one time when someone
cut in front of me and if he had not been hooked to that strap he would
have been thrown hard onto the floor," she said.

Pet seat belts are harnesses that click into the regular seat belts in a car and are adjustable to allow for the comfort of the animal.

Since cats are usually not the seasoned travelers that dogs are, and tend not to like being harnessed in any way, they do better with being inside a pet carrier. This does not mean that they will be happy going for a ride, just safe.

This Solvit Tagalong Standard Booster Pet Car Seat is an example of a car seat for your dog and is available from Amazon.com. The Solvit Pet Vehicle Safety Harness is also available. 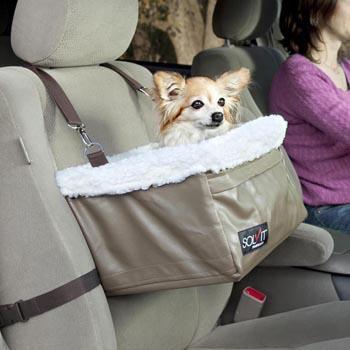 Even if your state does not have a law about pet restraints for drivers travelling with their pets, it is still a good idea for the health and safety of your furry loved one.