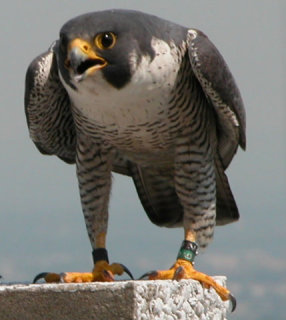 High atop 101 Hudson Street in Jersey City, a pair  of Peregrine Falcons return to a nestingsite prepared exclusively for them. Since 2000, this year marks the 14th season for these endangered birds to take residence once again on the skyscraper's rooftop.

Like a TV Reality series, a Falcon Webcam has been installed to capture the pair's every movement from the laying of eggs, to the banding, to feedings and ultimately the chicks taking their first maiden-voyage across the Hudson. Like the Jefferson's in the 1980's CBS TV hit sitcom of the same name, these falcons certainly know what it's like to enjoy living the hi-life, complete with their bird's eye vantage point and breath-taking penthouse views of the Manhattan skyline.

While the popular webcam used to be managed by the New Jersey Division of Fish and Wildlife's Endangered Species, this year, nonprofit Conserve Wildlife Foundation of NJ (CWF) will be responsible for oversight of the operation.

Like some Jersey City 'transplanted' residents, the adult male (also called a tiercel) has chucked the maddening crowds of Manhattan to take on a somewhat more subdued lifestyle found on the West side of the Hudson River, in the Jersey town insiders have appropriately nicknamed "Chilltown."

What's in a Name?

Since they became official residents of the Exchange Place district of Chilltown, a lot of folks over the years have been curious as to what to call these falcons. Conserve Wildlife Foundations’ education & outreach manager, Maria Grace, however points out, "it's important to remember that these birds are wild animals, not pets -- so we prefer to not name the adults or their chicks." Instead the falcons are banded with unique digit codes that are trackable by the department.

So while you can't welcome this year's pair back to the neighborhood by name, it's interesting to note that the "same female has outlived several mates over the course of last 14 years," said biologist Kathy Clark in an interview I conducted with her this month. The current tiercel mate, however has been doing 'the-same-time-next-year' routine since 2006.

Exciting news, for bird lovers -- as of this post -- the website notes that the Falcons' eggs should be dropped by the female any day now. Last year the first egg was laid on April 4th. According to spokesman, Ben Wurst, "If you happen to catch [the female] laying an egg or see the first egg [when viewing the falcons on the webcam], make sure to share it with us on Twitter or Facebook!"

You can register here to enter this Club, where you will receive news updates pertaining to the Jersey City Peregrine Web Cam program. Members of this exclusive club can also get upfront and personal with this pair and their chicks (aka "eyasses") when club members' names are entered into a sweepstakes to win a chance to attend the banding of the brood sometime in May, 2014.

So while falcon pairs are territorial, it's doubtful if any others will ever get a chance at an address the likes of 101 Hudson Street. And differing from the Jefferson's who perceived the East Side of Manhattan as an enviable 'social-climbers' paradise, the Jersey City Peregrine's know they've got an equal. if not better deal for these falcons to settle on the East Side of their city.

And here's a music video produced this year that celebrates that fact!