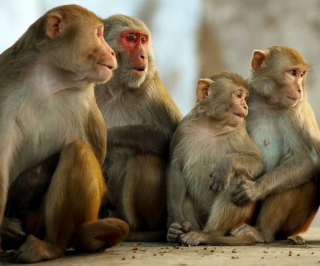 disease, equally as heinous. Yet over the course of the last 100 years, medical science has seemingly found a connection between two disparate diseases that is as startling as it is miraculous. . . and it all started with a group of test monkeys.

While some of us are aware that Dr. Jonas Edward Salk introduced the Salk vaccine to cure the polio (or infantile paralysis) epidemic in the 1950s, the history of this disease dates further back to the turn of the 20th Century, when most medical professionals suspected polio was an infectious disease, but had little proof.

Dr. Jonas SalkIn 1908, Dr. Karl Landsteiner and Dr. Erwin Popper used extracts from the spinal cord of a young boy who had died from polio to

Landsteiner & Popper replicate the disease in monkeys. These experiments allowed the disease to be transmitted from monkey to monkey, providing an invaluable model of the disease that could be studied and researched for potential cures.

One of the triumphs of medical research is that our youth today in developed countries are unaware of the horror of polio  - a viral disease which can leave severely affected sufferers unable to breathe without a ventilator or "iron lung.”

However, the mere mention of this crippling disease to people born before the 1950s will definitely elicit unpleasant memories. The author Jane S. Smith says in her book Patenting the Sun: Polio and the Salk Vaccine:

"The tales tumble out. First the memories of childhood summers spent in protective detention, exiled from city, shore, swimming pool, amusement park, movie theatre and wherever else the all powerful adults thought contagion may lie. Children were taught to be afraid of polio, to regard it as a fierce monster that lurked in the damp hollows of their experience."

Using Polio as a Cure

Brain cancer (also known as glioblastoma) are the last two words any patient wants to hear from his physician. Those who have received this diagnosis have likened it to a death sentence. Oddly enough though, what was once considered a fatal diagnosis 50 years ago could end up giving brain cancer patients in 2015 a fighting chance. Researchers from the Preston Robert Tisch Brain Tumor Center at Duke University have re-engineered the polio virus to cure brain tumors by removing a key genetic sequence.

Dr. Matthias Gromeier“So cancers, all human cancers, they develop a shield or shroud of protective measures that make them invisible to the immune system,” Dr. Matthias Gromeier, a professor of neurosurgery, molecular genetics, and microbiology at Duke, told CBS' 60 Minutes. “And this is precisely what we try to reverse with our virus. So by infecting the (cancerous) tumor, we are actually removing this protective shield. And (virtually) telling and enabling the immune system to come in and attack.”

Despite promising results from the clinical trials, Duke scientists still have one hurdle to overcome: approval from the Food and Drug Administration (FDA). Not surprisingly, the FDA is very cautious when it comes to granting even limited approval of a treatment derived from a deadly disease. However, the FDA approved human trials in 2011 after seven years of safety studies. The FDA expects to make a decision on granting Gromeier and his team “breakthrough status” in around a year.

A personal connection to these two diseases . . .

Frank CallariI
personally experienced my older brother Frank contracting polio in his youth, and the
torment my parents and siblings felt in watching the anguish he endured
for months on end, while he was treated by an army of doctors. Fortunately, we were all
vaccinated in time, so the disease did not spread throughout the family.

But I remember how the muscle in one of my brother's leg atrophied ever so slightly --
almost as if it was his courageous badge of honor in warding off that dreadful disease for
himself and his brothers. Unfortunately, my brother passed away this year,
suffering from brain cancer. The uncanny connection that ties these two
diseases together was actually played out at the beginning and end of my brother's life  -- and that irony is not lost on me, as it was the motivating factor that prompted me to research this topic for today's blog.

While a lot of credit needs to be given to Dr. Karl  Landsteiner. Dr. Erwin Popper, Dr. Jonas Edward Salk and 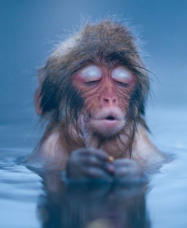 Dr. Matthias Gromeier for their remarkable research over these past 100 years, it’s important to remember if it wasn’t for those test monkeys, all of this research might have taken a different turn or been stalled at any point in time, along the way.

So hats off to our simian cousins for providing mankind with that necessary assist when we needed it most.