Polar Vortex or not, it's the depth of winter and baby it's COLD outside! Watching my neighbor's cat huffing and puffing his way across our yard at sunrise like a tiny, furry steam locomotive brought home the fact that pets and animals breathe much more visually in frigid winter weather. 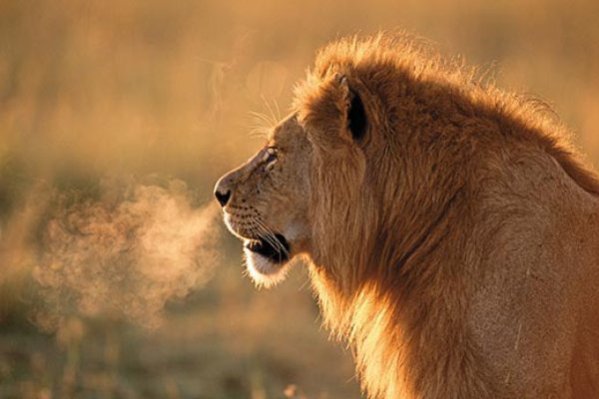 Being king of the beasts means employing smoke and mirrors to save one's strength, and since lions can't make mirrors that leaves smoke. This regal kitty is obviously steamed at something or someone... better hope it's not you! (winter animal image via Smithsonian)

You can hear a bird's song but can you see it? Yes, yes you can... provided the weather's wintry enough. This Red-Winged Blackbird can't wait for spring; the time to tweet is right now – in under 140 characters yet! (winter animal image via Laurence Arnold)

Feeling a little horse? Well take a wild ride on the mare of the mist! You know it's a cold morning when you can see your thoroughbred's every thorough breath. (winter animal image via Annie McDougall) 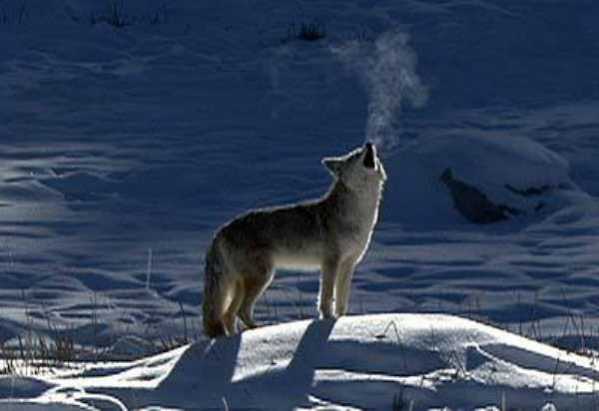 Cold enough to make you want to howl? This wily coyote needs no excuse to cut loose and the morning's chill air makes for a multimedia presentation. (winter animal image via Rebozo/Bob Landis)

If you're visibly huffing and puffing in a large park, you might be a rutting stag! The antler chorus comes courtesy of male stags calling out to their opposite numbers. Courtship displays are serious business; in other words these bucks ain't just blowing smoke. (winter animal image via Duncan Herring)

If hearing a wolf howl is an almost mystical experience, then “seeing” the actual howl adds another dimension to one of nature's most special moments. Mind you, getting this close to a howling wild wolf could mean that very special moment just might be your last. (winter animal image via Pixabay)

Who needs a smoking iron horse when you've got the true master of the rolling prairies, the noble bison! This is one train you do NOT want to catch, however, even if you're on your way to... Buffalo. (winter animal image via Marco Verch)

Protip: It's better to see a polar bear's breath than to feel it... on the back of one's neck. Words to live by, literally. (winter animal image via Garret Voight) 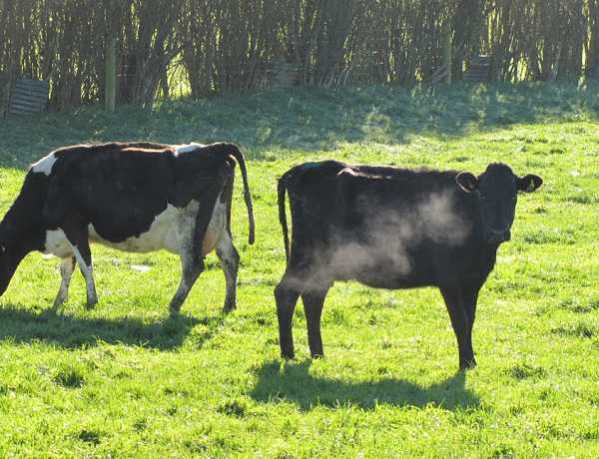 Cattle have been fingered (we use the term loosely) as a potent source of greenhouse gases but unlike “silent but deadly” methane, bovine breath is made up of CO2 and water vapor that's quite visible on a frosty New Zealand morning. Presumably their more noxious emissions are similarly showy though you won't see (or smell) that here. (winter animal image via Photographing New Zealand)

This three-day-old calf has never met a cat before so it does what anyone else would do: ward off the toothy/claw-y critter with a dragon-like fiery blast. Well, maybe when it gets a little older. (winter animal image via Mark Burr)

Sure, the moist mist emanating from our animal pals makes for great photography but severe winter weather is nothing to sneeze at no matter how furry you are. Keep an eye on your pets and keep in mind that when the thermometer plunges, the warmth of companionship is best enjoyed indoors. (winter animal images above via john malley)