A zoo in Suzhou, China is adding a traditional herbal flu remedy called “Ban Lan Gen” to the drinking water of their parrots, peacocks and other birds to help them resist H7N9 avian flu. In addition, the Suzhou East Garden zoo has substituted beef for chicken in meals fed to its resident carnivores. 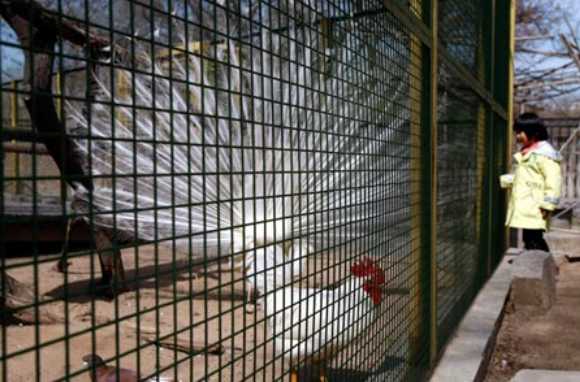 Ban Lan Gen is one of several traditional Chinese medicines touted by no less an authority as the Chinese government as both a preventative and treatment for illnesses such as influenza.

The herb has long been known to Western botanists under the Latin name Isatis Tinctoria and the common name Woad. The plant was utilized as a source of blue dye before Indigo took its place – the ancient Britons who met the invasion of Julius Caesar may have used it to paint their faces and bodies before battle, Braveheart-style.

It's only in China, though, that Ban Lan Gen has been ascribed medicinal properties and since its recommendation as a flu-preventative and Chinese pharmacies have had some difficulty keeping it in stock. The Suzhou East Garden zoo must have found a reliable source for the herb as several hundred captive wild birds are now ingesting it via their drinking water.

According to Qian Xiaohong, head of the Suzhou East Garden zoo's animal management department, none of the zoo's birds are suspected of being infected by the avian flu virus but there's nothing wrong with being proactive. Qian may have been influenced by a recent report in the Chinese media of a chicken farmer in neighboring Zhejiang province. The farmer has been adding Ban Lan Gen to the feed his 1,800 chickens though it's uncertain whether the supplements have had any notable effect, good or bad.

The zoo's herbal intervention seems to be aimed at keeping their birds healthy as well as allaying concerns of human visitors. “It will last for at least two weeks,” explained Chen Daqing, a spokesman for the Suzhou East Garden zoo. “After that we will decide whether or not to continue according to the situation.”

Some of the zoo's non-avian creatures are noticing a difference as well: carnivores accustomed to eating chicken have had their main meat courses switched to beef. As for people, you can order Isatis Root Granules as a dietary supplement at Amazon. (via Shanghaiist, China Daily, and Gardenology)

News Stories
Pet Medicine
Health
Science
Travel
Birds
The Cat's Out Of The Bag Now At The Refined Feline
Kitty Come Home! A New Way To Find Your Lost Cat
Feline Behavioral Problems Linked To Early Weaning, According To New Study
Rakfisk: The Sushi Of The Far North?
Comments