Being as dogs are the top manufacturers and distributors in the pet poop biz, it's only natural their dutiful owners would advertise the fact and Halloween offers the ideal opportunity to do just that.

What's surprising is that so many poop-scoopin' pet owners would take the time to craft a decent Poop Factory costume. Here are ten of the crappiest – and we mean that in a good way.

Here's Miss Chloe, posing in her Halloween costume from 2012 and by all indications, loving it! Our Poop Factory poster pup sports a costume so carefully crafted, detailed and custom fitted you'd think it was sold at PetsSmart. Want to make your own? Get all the illustrated details at Turtles and Tails. (poop factory costume image via Turtles and Tails)

The 4th Annual #CreepyCrunchers Dog Costume Contest was an overwhelming success, and among the well-deserved winning entries was the above terror, er, terrier of the plains submitted by Teresa R. of Kansas City, MO. We're guessing this pooch's M.O. is poopin'... on an industrial scale, no less. (poop factory costume image via Old Mother Hubbard) 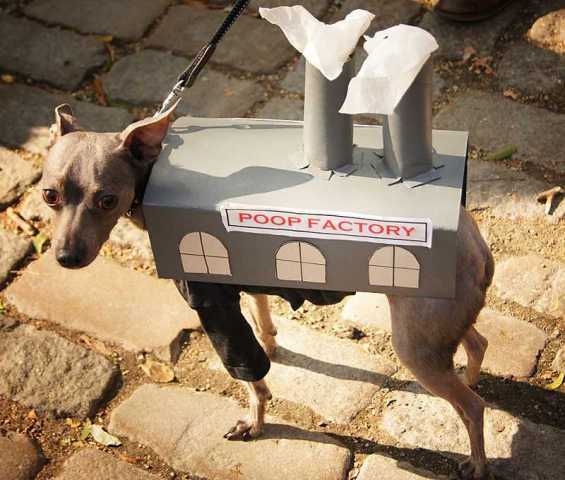 Bo's an officially licensed poop factory and not one of those sleazy fly-by-night (or "poop-by-night") operations. Bo took his show on the road to the Pet Parade at Mardi Gras and by all accounts was a huge hit. You read that right: huge "hit". (poop factory costume image via MBK)

Dignity: I Haz It 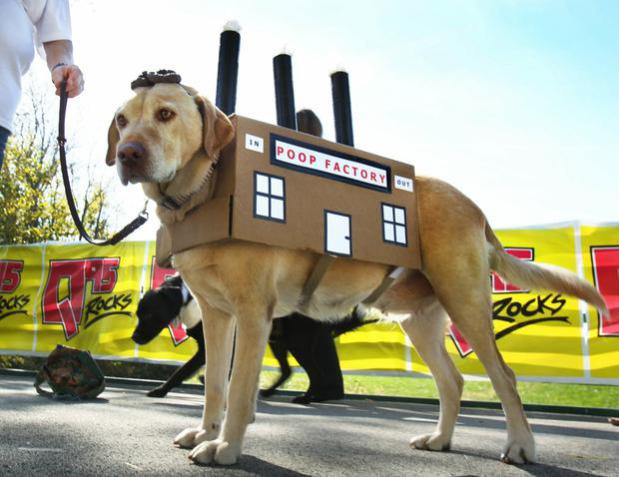 You might not think it's possible to remain dignified while wearing “a plastic doo-doo headband” but Sandy, a Yellow Lab owned by Judy Bireley of Ft. Wayne, Indiana, managed it with flying colors. Sandy was one of 835 dressed-up doggies attempting to set a world record for costumed canines on October 27th of 2013. Sorry Sandy, the record still stands at 1,326... one wonders how many of them were Poop Factories. (poop factory costume image via The Spokesman-Review) 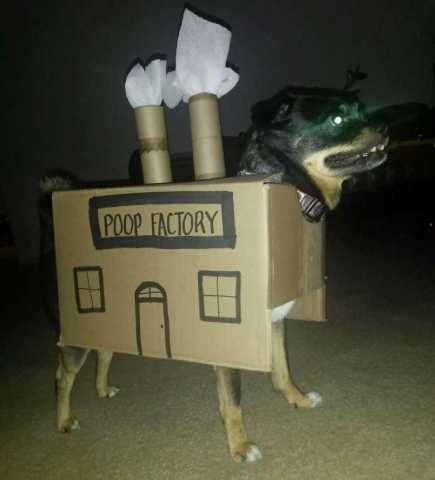 OK, maybe this costumed canine isn't actually a boxer but as for the boxed part – seeing is believing. Speaking of seeing, is that a laser beam zapping out of its right eye? Humiliate this dog at your own risk. (poop factory costume image via Funny Junk) 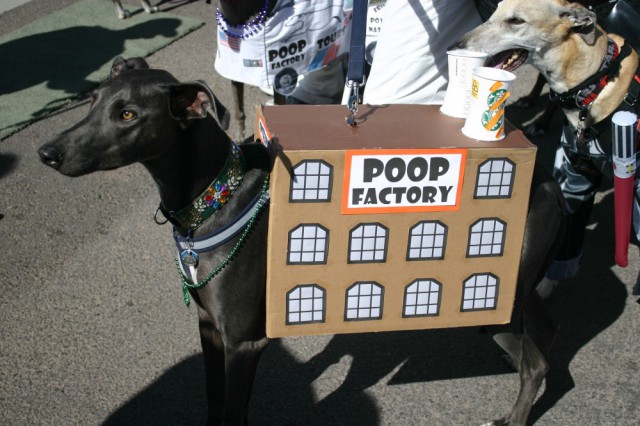 NIMBY or not, you don't want this poop factory in your neighborhood: multi-story construction for increased output and more ominously, a pair of classic hourglass-shaped cooling towers on the woof, er, roof. (poop factory costume image via Cami Cox Jim, St George News)

“Do You Have Any Greyhound Poop-On?” 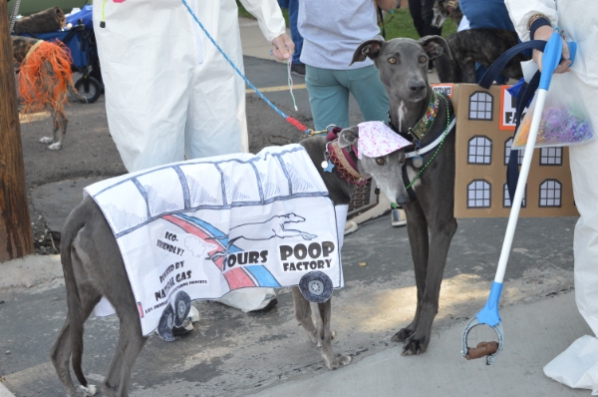 Sorry, couldn't resist... but what are the odds of TWO different interpretations of the poop factory costume theme meeting muzzle to muzzle? This one occurred at the 2014 Greyhound Gathering in Kanab, Utah, and the pooch's owner was kind enough to advertise eco-friendly tours of the Poop Factory powered by natural gas. (poop factory costume image via Greytalk)

Our featured costumed canine sports the usual toilet paper roll stacks, a very common (and very appropriate) use for the recyclable cardboard tubes. Now if only there was some way to recycle the "products" of this particular factory. (poop factory costume image via istolethetv) 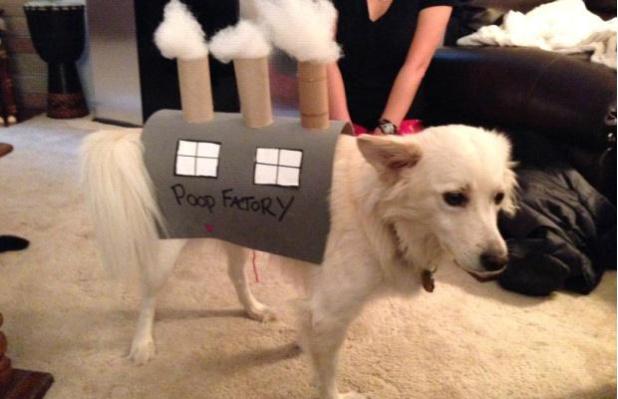 Adrienne Gee crafted this poop factory costume last year for Skeye, her 5-year-old American Eskimo cross, who looks a bit bemused by all the attention she's getting. Either that or she's amused, thinking “I may have to wear this ridiculous costume but you still have to pick up my poop”. And that, folks, really is the bottom line. (poop factory costume image via The Vancouver Sun)

Pet Costumes
Cute
Top Ten
Halloween
Dogs
Chickens Wearing Tutus Showing Up In Your Dreams? Those Are Not Dreams!

7 Dog T-Shirts To Surprise Mom On Mother's Day
Chico The Scary Giraffe -- The Animal Video Of The Day!!!

Thriller! Dress Your Dog As The King Of Pop This Halloween
Comments