Mark Rylance might have thought twice about adding his Jack Russell Terrier to the cast of Richard III on Broadway had he remembered a famous comedian's advice from years past. Although one of W.C. Fields most famous quotes was "never work with animals or children," he secretly like children. Dogs (on the other hand), not so much! 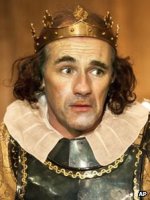 Mark Rylance as Richard IIIRylance, who plays the title role in “Richard III,” portrays the lead female, Olivia, in “Twelfth Night.” But the scene-stealer that night was his dog, Apache, who showed up on stage in a special appearance and absorbed all of the oxygen in the room when he dragged his feet on his way offstage, at the end of the curtain call - apparently stage-struck by all the attention.

“It was his Broadway debut,” Rylance noted like a proud father. “He made an

Mark Rylance as Oliviaexcellent entrance. But I have to teach him a few things about exits!” A much beloved dog of the actor, Apache also appeared with his master at the press meet-'n'-greet that night at Gotham Hall.

London's Globe Theatre has also staged the productions, with Richard III in the afternoon and Twelfth Night in the evening - an exhilarating total of six hours of theatre.

This Broadway company performing Shakespeare on Broadway for the first time followed the Tudor tradition of having an all-male cast playing all of the roles, including the female ones.

Previously, Rylance brought Apache onstage while playing Olivia in the opening night performance of Twelfth Night. At that time, the actor told reporters it would be the last time. "Apache is going to retire," he revealed. "He thinks no other night will ever match it. I've been trying to talk him out of it but he's very loyal and thinks it's best to quit now."

Not quite sure that Rylance was truly speaking for the dog -- or whether -- as a master with a bit of an actor's ego -- just doesn't like to be upstaged. Plus, Apache's got competition at home where he has to share the spotlight with not only Rylance's wife, director and composer, Claire van Kampen-- but also - of all things - a feline boarder, named Ethel. 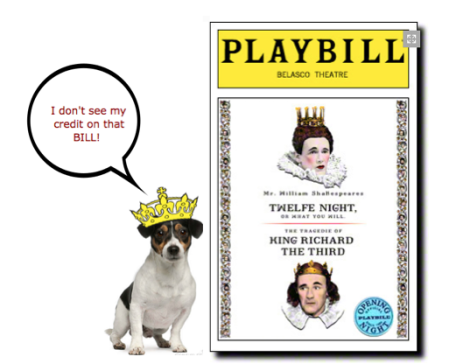 Spiced Out: 7 Pets & Animals Who Rock The Bushes Like Sean Spicer