Crate Training: How To Potty Train A Puppy 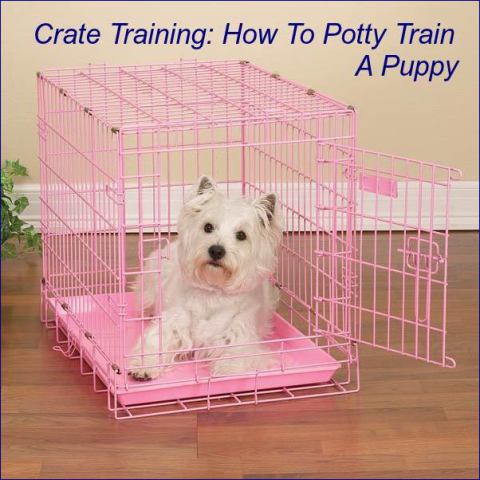 Potty training a puppy can be difficult and time consuming, especially if you don't know how or where to start. With the crate training method, your puppy will not only be potty trained, but he can learn a number of other good habits as well. Keep reading to learn how to crate train your puppy.

Why The Crate Works

Dogs have a den instinct, meaning they naturally enjoy their time within the crate. What this also means is that they don't want to use the bathroom where they sleep and eat. The crate will create a den for your puppy that has just enough room for him to sleep, eat, and chew on a toy, but not enough room for him to use the bathroom without having to lay in the mess. When you consistently take the pup outside from the crate to go to relieve themselves, they'll eventually associate outside with their bathroom.

What Your Should Know About Crate Training

There are a number of things you should know about crate training before you begin.

The crate should be just big enough for your pup to stand up in, turn around, and lay down comfortably. Any bigger and your pup might designate one area for waste, and the other for sleeping.

Introducing Your Puppy To The Crate

When you first introduce your puppy to the crate, don't force him to go in. You can get your puppy to go in on his own by placing things that the puppy likes inside the crate, like his favorite toys or treats. It may be a good iidea to designate a toy specifically for the crate that your pup can enjoy. Make sure to praise and reward your puppy when he goes into the crate.

Once he's going in and out of the crate on his own, you can begin to close the door. Start for short periods of time (3 minutes or so) and then work up from there. You can also serve your dog's meals inside the crate so he begins to associate being inside the crate with food.

It's important that you never use the crate to punish your puppy. For successful crate training, your pup must enjoy being inside the crate, and must associate it with positive things like treats, food, or a favorite toy.

How Long Your Pup Can Stay In The Crate

While you're home and awake, it's important to take your pup out of his crate every hour, and about 15 minutes after every meal. When you're not home or asleep, do your best not to leave your puppy in the crate for more than 4 hours at a stretch.

When you're asleep you can set an alarm at regular intervals to take him out. However, if you work long days or if you're gone for long periods of time, you may have to come home to take your dog out, or hire someone to come over and take him on a long walk.

What To Do About Whining

If your pup is whining because he needs to go to the bathroom, take him straight outside, and place him immediately back in the crate after he is done. It's okay to reward him if he goes to the bathroom, however, it's important to establish that you're not taking him out for play time. If he's whining just because of no particular reason, it's best to ignore him. If you cater to his whining every time he wines, he'll learn that it's effective, and you'll be teaching him bad habits. 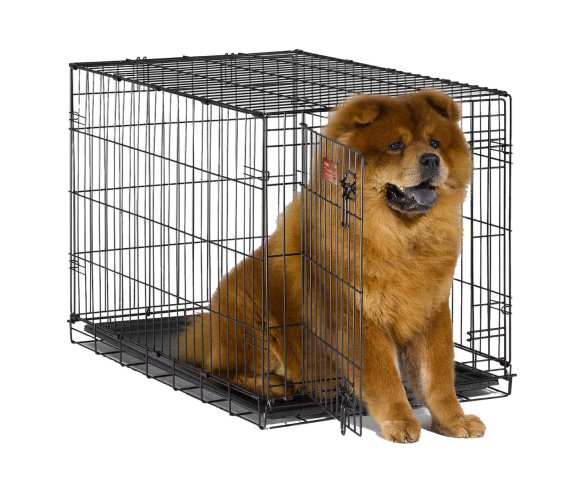 You'll need some basic materials to crate train your dog.

Puppies have small bladders, and can't be expected to hold it for more than an hour. Furthermore, most pups will go wherever they are at any given moment, unless they're in a crate. For this reason, while you're at home and awake, you'll need to keep your pup confined in a crate (but close by), or on a leash next to you. Be sure to take the puppy outside once an hour.

You'll need to keep your puppy confined in the crate while you're not home, and while you're sleeping. This will keep your puppy safe and prevent accidents. However, a puppy should never be kept in a crate longer than 4 hours at a stretch. This means that you'll need to set an alarm at night so you can take your pup outside a couple times, and you may need to come home during your lunch at work if you work a 6-8 hour day.

2. Taking Your Pup Outside

When you take your pup outside, designate an area for him to do his business. This will give him a "smell" that he can associate with going to the bathroom after he's gone there a few times. Take him to that area once an hour, and about 15 minutes after every meal.

When you take the pup to his bathroom area, pace or circle in the general area and repeat a keyphrase of your choice. Something along the lines of "go potty" will do the trick. With time, your puppy will begin to associate going to the bathroom with the keyphrase. Do this for 3-5 minutes or so, and if he doesn't go, put him back in his crate and return in about 20 minutes.

If your dog eliminates where he's supposed to, praise him and give him a nice treat. You're welcome to let the pup have free reign around the home for an hour or two, or give him a nice long walk after he eliminates to reward him and help him get the exercise he needs.

5. What To Do Overnight

A puppy won't be able to hold it for an entire night, which could result in an accident in his den area. To prevent this, set your alarm to go off every four hours, at least once or twice a night depending on how long you sleep. Take your pup to use the bathroom, and then climb back in bed. If your pup does happen to have an accident, either overnight or while you're at work, be sure to clean the area thoroughly and deodorize it so he won't go again.

With these steps and a little bit of patience, your puppy should be completely crate trained. Remember to give your puppy plenty of exercise, and not to leave him in the crate for too long.

Also Read: Crate Training: How To Litter Train A Dog

Stray Dogs In Sochi Being Rescued
Fly -- The Animated Animal Video of the Day!!!

PetsLady's Pick: Totally Cool Cowdog And Horse Of The Day