The Circus is NOT Coming to Town? 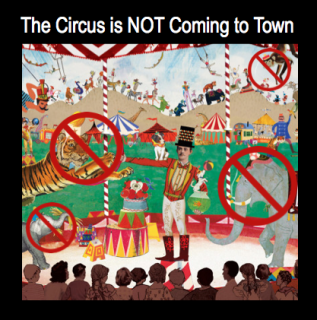 If U.S. Representative Jim Moran had had his way, the days of traveling circuses would have already come to an end. That's right . . . “lions and tigers and bears . . . oh no!”  In 2014, he took an historic stand for animals by reintroducing the Traveling Exotic Animal Protection Act (H.R. 4525), which would end the use of wild and exotic animals in traveling circuses, over concerns about their welfare and safety risks they pose to us.

Unfortunately that bill died in Congress. One of the detractors of the bill, Ringling Bros. and Barnum & Bailey Circus issued a statement about TEAPA. Stephen Payne, vice president of corporate communications for Feld Entertainment which produces the show said, “This bill doesn’t do anything to improve animal care. We’re the experts on taking care of our animals; we’ve been doing it for over 140 years.”

Greatest Show on Earth weighs in . . .

Interesting to note however, in my previous post, “When The Elephant In The Room Is No Longer In The Circus,” RBBB did give in to public protests regarding their treatment of elephants. “There's been somewhat of a mood shift among our consumers," said Alana Feld, the company's executive vice president. "A lot of people aren't comfortable with us touring with our elephants."

The Feld organization now owns 43 elephants, and 29 of the giant animals live at the company's 200-acre Center for Elephant Conservation in central Florida. Thirteen animals will continue to tour with the circus before retiring to the center by 2018.

In absence of the Federal Government not passing legislation, there is one victory in this regard that was enacted on the West Coast. In April 2015, the San Francisco Board of Supervisors voted unanimously to ban the use of wild and exotic animals used in circuses. The unanimous vote proposed by Supervisor Katy Tang was designed to protect these animals “from cruel and inhumane treatment and to protect the public from the danger posed by the use of wild and exotic animals for entertainment.”

The ban affects just about any animal but domestic cats, dogs and horses and livestock like cattle, sheep, pigs and goats. Not only would lions and tigers and bears be barred from local performances, but so would elephants, sea lions, ferrets, dolphins and even ostriches and emus.

As other cities and states follow suit with similar legislation, supporters of these bans continue to argue the issue needs to be addressed on a federal level in the U.S., not only because it just needs to end, but because the mobile nature of circuses makes it difficult for law enforcement and inspectors to follow up on incidents and violations of the Animal Welfare Act, of which there are many.

U.S. citizens can help by signing and sharing a petition urging Congress to make the U.S. one of the next nations to pass laws that would ban their use in circuses. To date, almost 30 countries have already passed legislation as of this posting, and there there are over 61,000+ signatures on a U.S. petition.

Won’t you add your name and help circulate this petition to others?

During COVID-19, No Need To Leave Home To Be Entertained By Zoo & Shelter Animals
This Parrot Is No Stool Pigeon