There are people who have posited that cats are really aliens who have
come to enslave our human society. Stories abound to suggest this through
the mysterious activity of the felines. They come and go quietly --
unless, of course, they want you to open the door ad infinitum
while they decide whether to go out, or in, or out, or in. One such cat
turned up in Los Angeles, California, in 1952 to become the mascot of an
elementary school classroom. 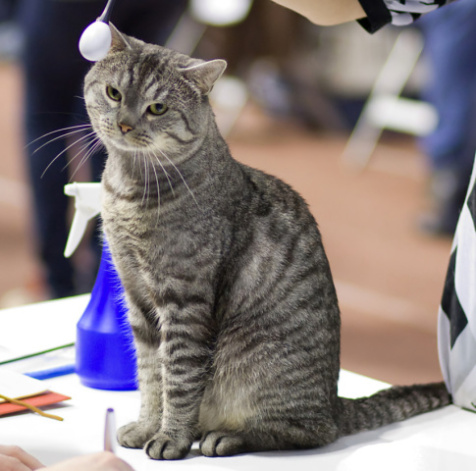 The tabby found his way into a sixth grade classroom at Elysian Heights Elementary School -- Room 8 to be specific -- through an open window. He jumped up on the desks and wandered around to say hello to all of the children. The teacher wasn't so sure about having a cat in the classroom but the children appealed to her kinder nature by pointing out how painfully thin he was. She relented and agreed that they could at least give him some milk.

Afrwe the children had gone to recess they found him asleep on a desk. During their absence he had dug through their lunches foraging for something a bit more substantial to eat and the remnants were strewn about. At lunch the kids shared more of their lunches with him. After another nap he took off across the playground. No one thought that they would ever see him again.

The next morning he walked back into the classroom through the door along with the students. This led to him becoming a fixture in the school, patrolling the hallways and sleeping on desks. The children duly dubbed him Room 8 after their classroom.

The school developed some strict rules concerning Room 8. The children were not to feed him (but they did anyway). No one was allowed to bother the cat. For that matter, Room 8 was not allowed to become too much of a distraction in the classrooms. If he was he would be gently but firmly removed from the room.

The real mystery of the cat came along with summer vacation. When school let out he would be nowhere to be found. When the students returned, so did Room 8.This happened every year for the 16 years he spent living in the school.

He lived to a ripe old kitty age, estimated to be 21 years old, and passed away in 1968. During this time he became something of a celebrity. Articles about him were printed in everything from the Weekly Reader to the Los Angeles Times. He made personal appearances at a variety of events. Look magazine did a three page spread on him in 1962. In 1966 a book about him was published, "A Cat Called Room Eight." It went through six printings and is now an expensive collector's item. He was even part of a television documentary, "Big Cats, Little Cats."

In 1964 his paw prints were made in concrete outside of the school. Every year Room 8 joined the sixth graders for their class photo.

In 1968 he was also featured as part of a television documentary. It was later that year that the aging tabby cat passed away. Like so many aging cats, he died of kidney failure. He is buried at the Los Angeles Pet Memorial Park. His death was also followed by a very rare three column obituary in the LA Times.

His legacy lives on in an organization named Room 8 Memorial Cat Foundation after him.  The foundation runs a shelter for cats whose owners have passed away and finds them new homes.

Perhaps during all those summers when he disappeared he was really returning to the mother ship to debrief with superiors and report on all he learned about Earth humans during the rest of the year.