The Cat Came Back: Lost Sweater-wearing Pet Now Home For The Holidays

Call it a Christmas miracle or simply a case of a cat whose sense of smell was dulled by seasonal ice and snow, but Meow-Meow is back in the arms of his loving family once again! The sweater-wearing black cat vanished on the evening of December 22nd but made it back to his Halifax, Nova Scotia home just in time for the opening of holiday gifts. 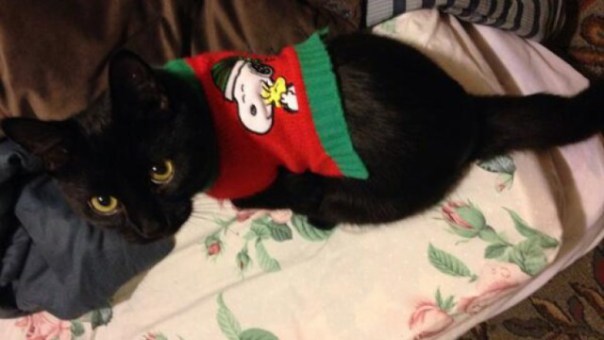 Chantelle Rideout, Meow-Meow's owner, had dressed the black cat in a seasonally-themed sweater Sunday evening as she and her family went out to turn off their Christmas lights. That's when they noticed Meow-Meow was missing. “We just ran outside to turn off the Christmas lights,” explained Rideout to a CBC News reporter, “and he must have snuck out.” said owner Chantelle Rideout.

As seven-month-old Meow-Meow is an indoor cat, the thought of him outside on a winter night with stormy weather in the forecast filled Rideout with trepidation. When he wasn't back by Monday morning, Rideout was ready to push the panic button.

Instead, she pushed the social media button: local media outlets were contacted and appeals were placed on Kijiji and Twitter, the key being a photo of Meow-Meow wearing his festive red & green Peanuts-themed Christmas sweater. “We’re hoping, a little bit, for a Christmas miracle and that he makes it home by Christmas,” said Rideout. Though almost all black barring a few snow white hairs on his chinny-chin-chin, Meow-Meow would certainly stand out thanks to his seasonal sartorial splendor.

This story has a happy ending, thankfully, as Meow-Meow managed to get back to home base on his own, health and sweater intact. “3 am on Christmas morning, and we found meow-meow!,” tweeted Rideout. “Thanks everyone for your help and kindness!” (via CBC)