Hey there toothy vampires, how do ya like THESE canines? Halloween may have been made for kids but judging by the looks of these freaky scary pet costumes, the end-of-October occult outing is definitely going to the dogs. 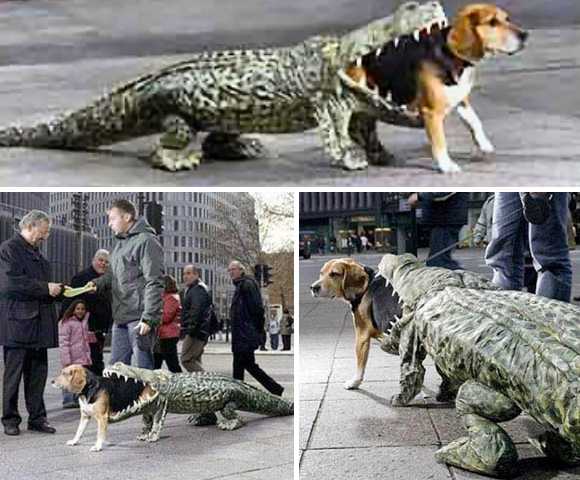 You know the Germans always make good stuff, and that goes double for dog costumes. The Croc-Eat-Dog costume above was dreamed up by the Neunkirchen Zoo in Germany, who commissioned the bizarre mashup in 2007 as the centerpiece of their “Come to the Zoo before the Zoo comes to you” promotion. Das Crikey! (Halloween Dog Costume images via The Presurfer and Costume Pop) 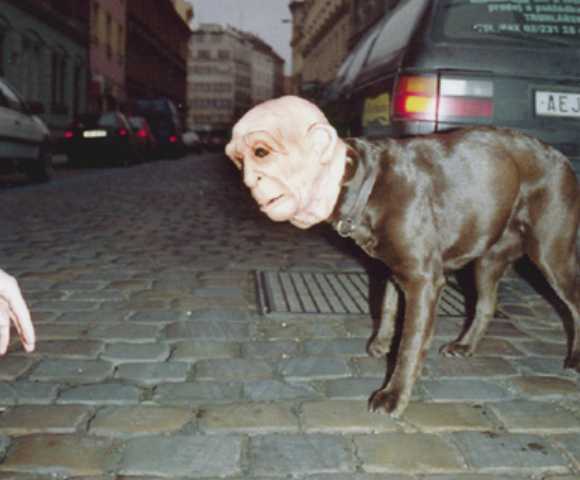 That human-headed dog from Invasion of the Body Snatchers was WAY creepy, good thing it wasn't real. Bad thing the monstrosity above IS real, which means there's a chance you may stumble upon it (or vice versa) some dark Halloween night. As in the movie, just stay calm and try not to scream. (Halloween Dog Costume image via Satan's Handmaiden)

8) No Shirt, No Shoes, No Cerberus 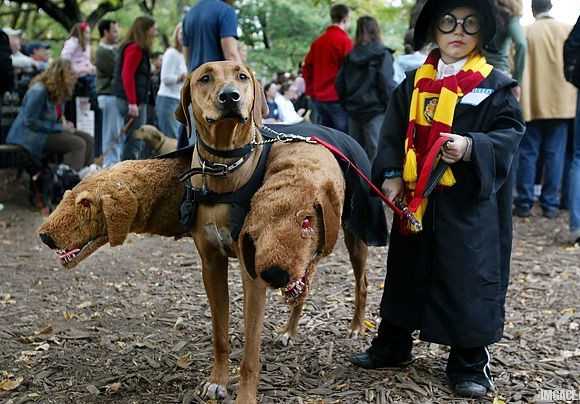 Known as Cerberus to those of a certain age and Fluffy to fans of the book and film  Harry Potter and the Philosopher's Stone, this legendary three-headed dog's barks are worse than his bites. Question... does his owner need one collar or three? (Halloween Dog Costume image via TYWKIWDBI) 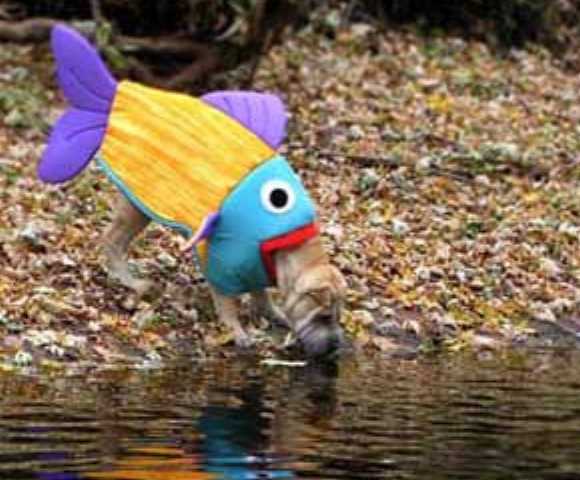 Sometimes a pet's Halloween costume can be a dog's breakfast, other times the dog IS the breakfast. Hey, those fingerlings have gotta eat y'know! Circle of life, kids, circle of life. (Halloween Dog Costume image via ConstructionDealMkting) 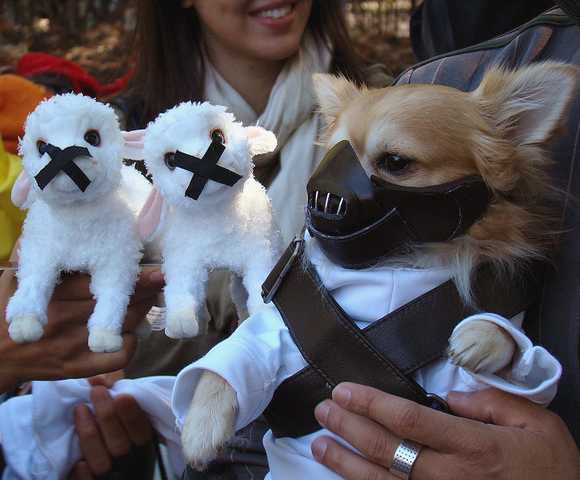 Here's one psychotic pooch who prefers Chianti to candy, with some liver and fava beans on the side. As for the, er, “silenced lambs” on the left, we're guessing our cute canine-ibal would much prefer Starlings. (Halloween Dog Costume image via Istolethetv) 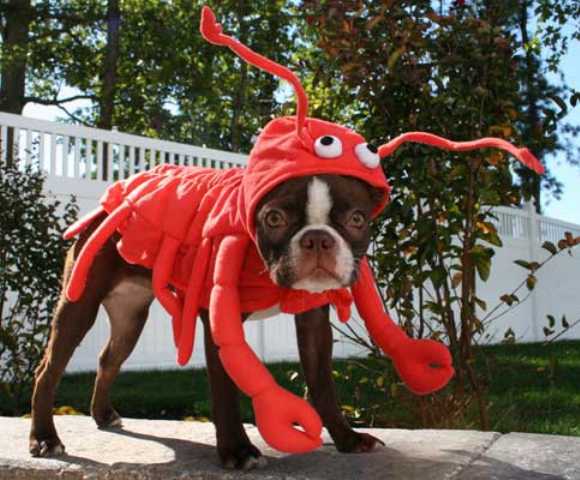 It's a trap... or at least it was found in one. Our Maine attraction is a primordial lobs-terrier from an octopus's garden under the sea, back to the buffet for more garlic bread but understandably wary of hot butter. Kudos to the intrepid photographer who snapped this bemused Boston Terrier before it could return the favor.  You can get this lobster costume here. (Halloween Dog Costume image via ConstructionDealMkting) 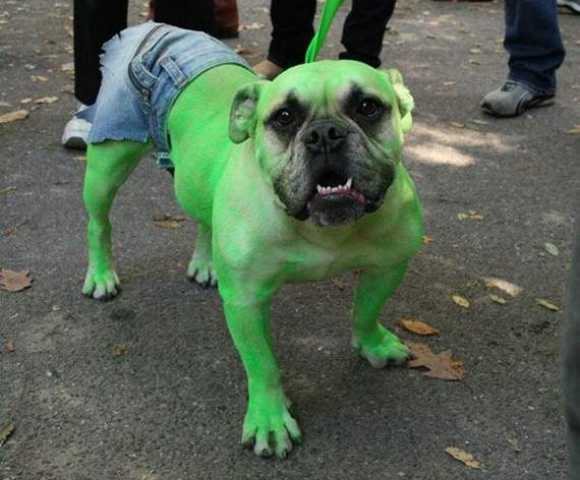 Would you believe “Hulk Dog” here shrinks down to a pink-beribboned Toy Labradoodle when his current fit of anger's worn off? Us neither – he actually reverts to a drooling bulldog once the green food coloring wears of. Regardless, don't get him angry! (Halloween Dog Costume image via Istolethetv) 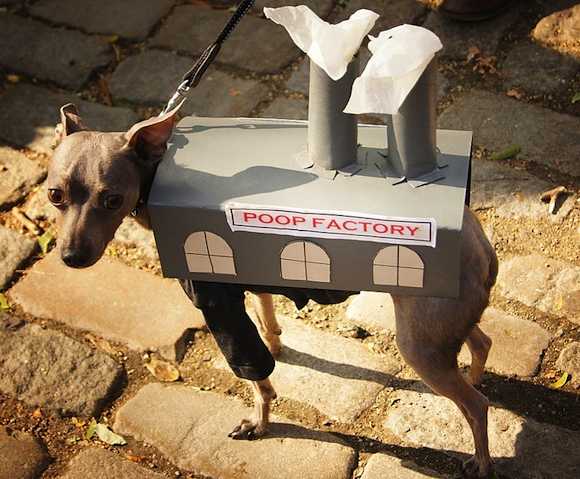 There may be little movement in this sluggish economy but this embarrassed-looking pet's got a scoop for you – and you're gonna need it. Nothing like keeping the production line in motion though we're guessing the “factory” owner wishes the workforce would go on strike every once in a while. (Halloween Dog Costume image via Neatorama) 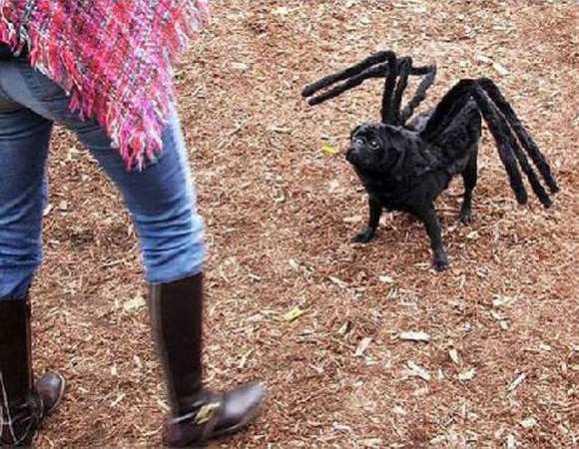 Spider Pug, Spider Pug, does whatever a Spider Pug can... and by the looks of this spider costume (we assume it's just a costume), he does whatever the heck he wants! Going back a few decades in relevant cinematic history, just wait 'til Annie Hall calls on Woody Allen to deal with THIS bathroom invader. (Halloween Dog Costume image via Love Pets) 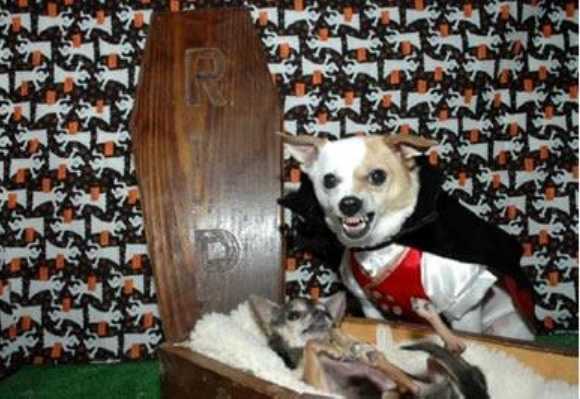 “I vant to suck your bloodhound!”... and if that doesn't sound disturbing enough, check out the demonic grimace on this conspicuously caped canined canine. Guess that's what you get when you cross Pet Sematary with Frankenweenie. You can get your own Dog Dracula costume here. (Halloween Dog Costume image via kecute) 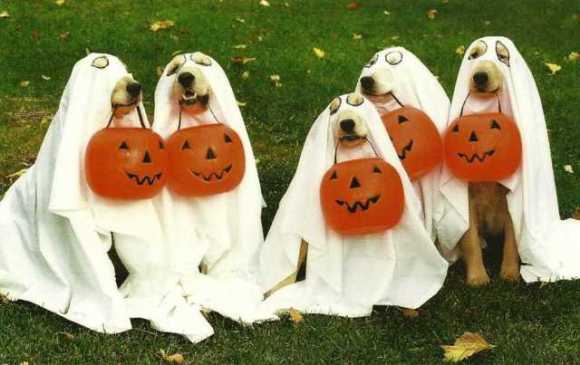 Black cats, big-eyed bats and assorted insect creepy-crawlies have traditionally dominated the Halloween scene so it's no wonder Fido & Fifi have found themselves on the sidelines... until now, that is. Better stock up on Scooby Snacks this year 'cause when costumed dogs come calling, it's better to treat than to trick. (Halloween Dog Costume images via La La Doggy, top, and A Traveler's Photo Journal, above)