Jambo was born in 1961 at Zoo Basel in Basel, Switzerland. He was
moved to the Jersey Zoo on the British dependent island of Jersey off
the coast of France. The handsome silverback gorilla rocketed into the
world spotlight in 1986 after he was credited with saving the life of a
five-year-old boy who had fallen into the gorilla enclosure and lost
consciousness. 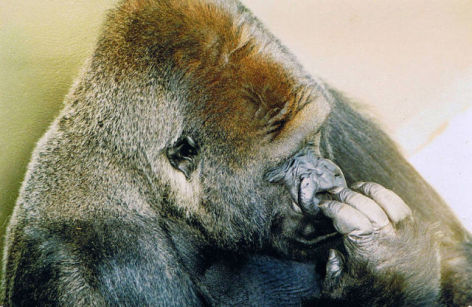 Jambo means 'hello' in Swahili. He made history by being the first male silverback gorilla to be born in captivity AND the first to be raised by his own mother. His contributions to gorilla history did not end there as he fathered many other gorillas and became a hero by his own actions.

While Levan Merritt was lying unconscious in the pit he was exposed to the risk of being attacked and mauled by the animals. Jambo placed himself between Levan and the other gorillas in a defensive posture to protect him. He even stroked the boy's back in a comforting gesture.

When the boy regained consciousness and began to cry, all of the gorillas retreated in alarm, including Jambo. The gorilla led the others indoors to keep them away from Levan. Two keepers and an emergency medical technician hurried in to rescue the child.

Much of the terrifying episode was caught on video shot by Brian Le Lion. As the story made its way around the planet it began to change human perceptions about the temperament of gorillas. Jambo not only helped save a human life, but created a better understanding of his species.

In 1992 Jambo was found dead in his enclosure by his keeper. A necropsy showed that the silverback had passed away suddenly after one of the arteries in his chest ruptured and created a massive hemorrhage.

His biography was penned by his keeper, Richard Johnstone-Scott, and is available at Amazon.com.  In 2012, 20 years after Jambo's passing, Jersey issued a set of postage stamps commemorating Jambo and his actions. The silverback will be remembered for his heroism for a long time to come.