Zoo in Gaza Resorts To Taxidermy

These animals are not your typical zoo inhabitants, but the South Forest
Park Zoo in Khan Younis in the embattled and impoverished Gaza Strip is
not your average zoo. When animals die here their zoo duty is not over,
they are stuffed in a somewhat crude fashion and returned to their
cages.

This is not the first Palestinian zoo in Gaza to resort to taxidermy or other unusual methods to keep going. In 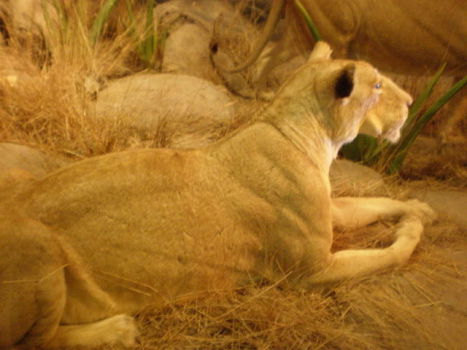 A taxidery lion similar to one at the South Forest Zoo 2009 a zoo in Gaza City resorted to painting a couple of white donkeys with black stripes to look like zebras to replace those that had died of neglect during the Israeli offensive. The first animal stuffed  was a giraffe with the name Brownie at a zoo in the West Bank City of Qaluqiyla. He had died during the second Palestinian uprising against Israel nine years ago. Brownie now resides in the zoo's museum. The zoo veterinarian there had had some training in taxidermy.

Since Hamas took control of Gaza in 2007, Israel has blocked all ports and waterways, and restricted border access to a single crossing. Egypt has also restricted movements across its border. Animals are smuggled into Gaza through an underground tunnel from Egypt, making the procurement of new animals expensive and slow. Rethinking the zoos in Gaza has become a necessity.

The conditions at South Forest Park are hardly optimal. Supplies in the isolated Palestinian Territory are sketchy, so the experience can be depressing and unsettling. The lion looks mangy and emaciated, there is a monkey missing limbs and a porcupine with a hole in its head.

The owner, Mohammed Awaida, opened South Forest Park in 2007. In December 2008 Israel launched a military against Hamas. During the three weeks of the offensive, Awaida was unable to get to the zoo and many of his animals died of starvation and neglect. It was after this that the idea to stuff the animals came to him. He found out how start from the Internet. With sawdust and formaldehyde he did the best he could.

There is no full-time zookeeper to look after the 65 live animals all the time.  There is no government oversight of zoos. Visitors are unsupervised, giving animals chocolate and chips. Medical care is done over the phone with veterinarians in Egypt. However, the zoo is one of the few entertainment venues in Khan Younis, a city with a population of 200,000.

There is no animal rights movement in Gaza.