In an area of the Tulsa Zoo in Oklahoma that used to house a butterfly
exhibit there is now a garden where the zoo horticulturalist is growing
fresh food to feed the animals. As with so many people around the
country, the zoo is using the garden to help offset the increasing cost
of vegetables. 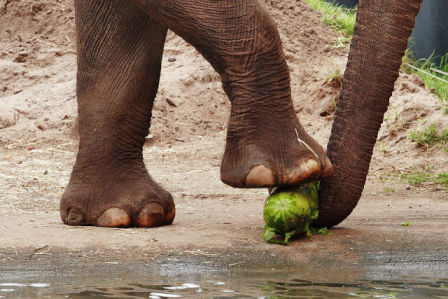 In addition to some tasty mulberry bushes, the garden is filled with peppers, cabbage, kale, and many, many tomatoes. It has been dubbed the "commissary" garden since the food supplements the diets of the animals in residence.  The garden is not making a huge dent in the food budget, but it is local, sustainable, and the zookeepers know right where the food is coming from. They also know that the food really is organic and pesticide-free.

The heat and drought of this spring and summer has been hard on the garden. The vegetables aren't the prettiest and we might turn our noses up at the result. The animals are not as picky as we are -- especially the elephants. They will eat just about anything. This includes the trimmings from the mulberry bushes.

One thing is sure about feeding the zoo animals from their own garden -- the end result will help fertilize next year's garden.

How Horses Helped During The Great Depression
Comments