Panda dogs are all the rage this year -- in China. This craze started a
couple of years ago and is really starting to catch fire. The dogs are
not a breed. They are cosmetically enhanced pooches, primarily chows.
The dogs are cute, fuzzy, and no doubt raising a few eyebrows among
animal rights activists on this side of the planet.

Some dogs end up looking dreadful, but others look very panda-like. It all depends on the breed of dog you choose. Most terriers don't quite make the look, for example. 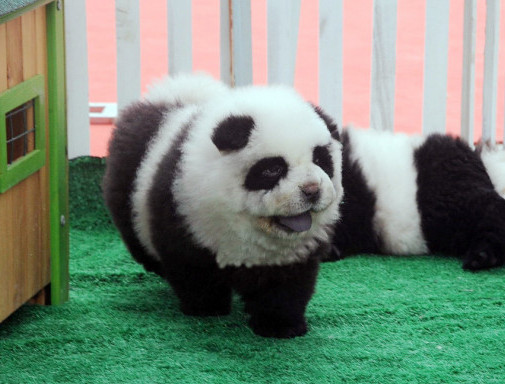 Pet shop owner Hsin Ch'en of Sichuan Province does up chow dogs with the panda look before selling them. They are so popular that he is having trouble keeping them in stock. And they do look like pandas . . . if pandas had fluffy and curly tails and could bark. These dogs are the new darlings of the emerging Chinese middle class.

Ch'en says that the fur dyeing process he uses is safe for the dogs -- no chemicals or cruelty involved. Naturally, due to the amount of work that goes into the appearance of the animal, panda dogs cost significantly more.  Apparently the customers don't seem to mind since the dog turns heads, turning it into a sort of status symbol. 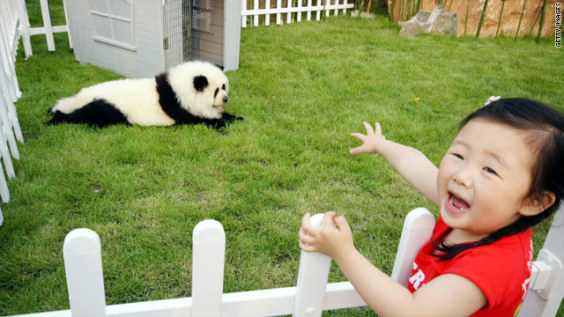 The process of grooming and dyeing the fur takes about two hours. It lasts about six weeks before it needs to have a "touch-up."

Since it is unclear what Ch'en's process actually is when he turns a chow into a panda dog, there are those questioning the cruelty-free claim. No evidence has yet come forth to refute the claim.

Ch'en commented that ten years ago many Chinese had the natural instinct to have dog as something for dinner. Now they are more likely to want to keep a dog as a friend and companion. For people concerned about animal rights, making a dog look like a panda is definitely a step in the right direction over using one for sandwiches or stir fry.

Perhaps this trend is a cultural statement. By creating panda dogs they are creating an animal that is uniquely Chinese.