When you get up from your seat at the circus, the animals aren’t supposed to follow you to the snack bar or restroom. Apparently this tiger didn’t get the memo!

Jenna Krehbiel visited the Isis Shrine Circus in Salina, Kansas with her family for the first time yesterday and took a break from the exciting big cat show to use the restroom. Little did she know that while she was walking to the toilets, one of the performing tigers had escaped its handlers and had made its way into the opposite end of the bathroom Jenna was headed for.

Just as the door shut behind her, Jenna noticed the 250lb+ tiger about two feet from where she was standing. She quickly exited the small bathroom as the tiger began walking toward her.
Circus staff immediately barricaded the entryway that the tiger had used to enter the women’s restroom and were making their way to close off the other bathroom door before Jenna had her close encounter with the circus animal. None of the patrons, or the tiger, were harmed in the incident.

The animal’s handlers claim that the wild animal was “well trained” and that there was no actual risk to anyone. 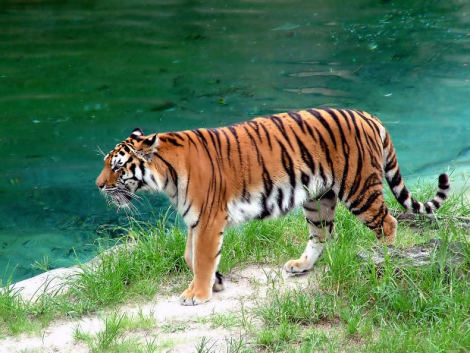 Found in areas of India, China, Russia and southeast Asia, tigers are the largest living cat species. These apex predators hunt a wide range of prey including deer, boar, buffalo and other creatures. The solitary cats easily breed in captivity and there is a large population of tigers in the United States alone. Tigers are endangered in their native habitat primarily due to overhunting and habitat destruction.