On a cold fall night back in 2006 Shana, a wolf-German Shepherd hybrid,
came to the rescue of the 81-year-old couple who were running the animal
sanctuary where she lived. They were out tending to the nightly routine
and 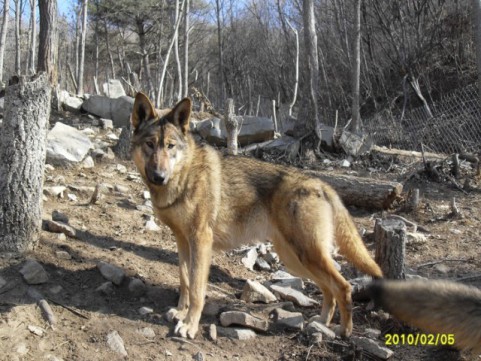 Wolf-Dog Hybrid (Photo by Venpia/Creative Commons via Wikimedia)tending to injured animals. Suddenly a massive storm hit and
knocked out the power. When they went outside to see what was happening
they quickly found themselves trapped by thick snow and falling trees.

Eve and Norman Fertig huddled together in the narrow passage between the aviary and the hospital building to avoid the falling trees and limbs. Unfortunately they couldn't climb over all of the broken limbs that blocked their path. The temperature was continuing to drop and they were not dressed to be out in the elements. It had been a lovely evening when they had gone out. Fortunately they had Shana with them.

The Fertigs had rescued Shana from a puppy mill seven years earlier when she was just two years old. Now it was her turn to rescue them. She began digging a path through the snow and under the branches. It took her two hours, but she managed to create a one-foot tunnel the whole twenty feet back to their home.

Shana came back to get them, barking to tell them to follow her into the hole. Norman was not keen on following the dog into the hole. He said that he had had enough of foxholes back in World War II. Eve threatened to divorce him if he didn't go. He said that the family would be horrified if they got a divorce. She pointed out that the entire family was already dead. So he went. And so did she.

Well, it wasn't quite that easy. Eve climbed on Shana's back and held onto her neck. Norman grabbed Eve's legs. Then Shana used all of her strength to drag the two of them through her little tunnel. It took quite a long time. They reached the fence outside their home at 2 a.m. Shana helped pull them out and get them to the back deck, they got the back door open and literally fell inside.

Their problems were hardly over. With no power the house was cold and dark. Shana lay on top of them to keep them warm. She stayed there until the fire department arrived the next morning to help them.

Eve said that it was the most heroic thing she had ever seen in her life and that there was no doubt at all that Shana had saved their lives. The dog later received a fire helmet from the local fire department and the Humane Animal Treatment's Hero's Award for Bravery, an award given to humans.