Will Sakadachi Be The Next White House Dog?

Dear President-Elect Obama: Unless Malia is allergic to polyester and acrylic, there should be no problem having the Sakadachi Lucky Puppy in the White House. 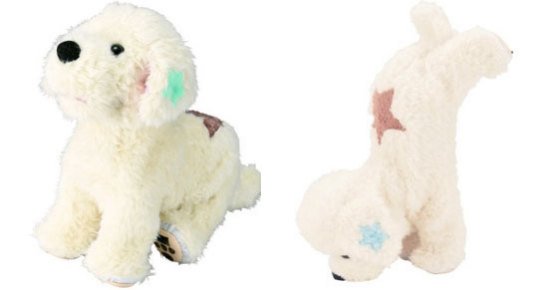 Sakadachi's not completely dog; he's part robot, made by Japan's Sega Toys. But, Sakadachi is a brilliant little robot dog... he does every trick kids love to teach their dogs....

Running on 4 AA batteries, Sakadachi can get his exercise pretty much anywhere and won't 'lose it' on the White House carpets. He comes with a leash, so you can hold him back from nagging reporters.

The kids may need to learn a few words in Japanese, because the puppy only obeys Japanese commands, and if they really need to read the instruction manual, you might have to call in the Japanese Embassy. People in Japan, especially those in Obama, Japan, are big fans of yours, so the Embassy favor should not be a problem.

Somewhere between teacup and toy size, Sakadachi does seem to be a mixed-breed dog, perhaps part bichon frisé and part tattooed chihuahua.. and he's definitely homeless. So I think he meets a lot of your prerequisites, and his full name, remember, is Sakadachi Lucky Robotic Puppy!

What do you think, first family-elect Obama?

The Cuteness Of Lil Bub Right In Your Home!
Fun Animal Backpacks For Kids

Tardigrade Plush Toy's Got Eight Legs To Cuddle You

Prop Your Beat Feet On An Animal Ottoman
Comments