Will Political Caucuses Go By The Way Of The Dodo Bird? 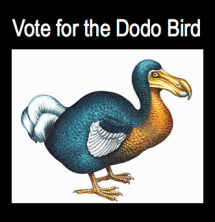 Now, that we’re into the thick of the political race for the presidency in the United States, political caucuses have come under scrutiny as to their legitimacy in the 21st Century? After all, they really don’t have a particularly good track record in their ability to select winners. Rick Santorum in 2012 and Mike Huckabee in 2008 couldn't garner more than a temporary uptick out of their wins in Iowa. This past February, Ted Cruz bested Donald Trump, yet the national polls have Trump as out in front as the prohibitive national GOP nominee. And while Hillary Clinton edged out Bernie Sanders, that race is still up in the air as to which candidate will go off to the Democratic convention this summer.

So what’s the connection between Caucuses & the Dodo Bird? 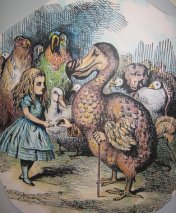 Well, the obvious answer is that the caucuses might become just as extinct as the Dodo bird. Couple that with the fact that since the Dodo has always been described as not being that bright, by inference, political caucuses might have not been the smartest idea for selecting viable candidates for high office.

However, there’s yet another reason to associate the Dodo bird with the primary electoral process, where it goes back a couple of centuries to when one of the world’s most beloved author first penned ‘Alice’s Adventures in Wonderland’ in 1865.

In his book AAIW, Dodgson creates a caricature of himself as a Dodo. It’s said he specifically chose that bird to represent himself, because of his speech impediment — where, with self-effacing humor he was known to introduce himself to others as “Do-Do-Dodgson.”

The tale starts off with Alice meeting up with a raucous band of characters who represent some of Carroll's  cronies of the day. All thinly disguised as birds, the ‘Dodo’ represented Carroll, the ‘Lory’ was Lorina Liddell, the ‘Eaglet’ was Edith Liddell and the ‘Duck’ was Reverend Robinson Duckworth (for obvious reasons). 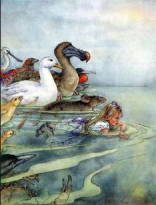 And as the story goes, in order to get dry after a swim, the Dodo proposes that everyone run a Caucus Race — where the participants run in patterns of their own choosing, starting and leaving off whenever they like, so that everyone wins. At the end of the race, Alice distributes prizes to all of her fellow contestants. Leaving no prize for herself, the Dodo inquires what else she has in her pocket. As she has only a thimble, the Dodo requests it from her and then awards it to Alice as her consolation prize. The Caucus Race as depicted by Carroll is a satire on the political caucus system of its day, mocking its lack of clarity and decisiveness. Sound familiar?

Not as Dumb as it Looks

However if we are too dismiss Caucuses because of Carroll’s reasoning, it would infer that Dodos were indeed not really bright — when it was recently proven that's actually not the case. 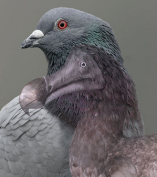 Birds of a FeatherNew research was just released noting the size of the Dodo’s brain was equivalent to that found in our modern-day pigeon. And while many would say that pigeons might go the way of the Dodo bird some day — it’s a proven fact that pigeons are able to propagate exponentially (lessening their chances of ever going extinct.) But more importantly, they are also very savvy birds, because they are true survivors who are able dwell in the harsh conditions of urban cities where traffic, overpopulation and crime are constant hurdles they have to maneuver around on a daily basis.

So in the spirit of ‘birds of a feather’ and in honor of the extinct Dodo bird, long live our cities’ pigeons! But in the case of caucuses, not so much!