While Darwin's theory of 'survival of the fittest' was first conceived on the Galápagos Islands back in 1835, it's somewhat ironic that the birds, reptiles and mammals who call this locale their home are some of the friendliest animals you'll find on the planet.

Unlike the rest of the world's archipelagos, the Galápagos found off the coast of Ecuador still maintain 95 percent of its pre-human quota of species. And tourists often note that one of the most intriguing features of the destination is man's opportunity to come face-to-face with wildlife who do not fear humans. Only in the Galápagos do visitors have the chance to walk alongside grazing giant tortoises, approach birds like blue-footed boobies, and marvel at penguins at the equator - all on the same terrain.

And while swimming with the dolphins is a trained activity in other tourist destinations, sea lions seem to instinctively like to swim with humans without any encouragement. David Braun from National Geographic noted that when he and his son decided go snorkeling off the coast, they soon learned that they were not alone in the ocean. "Sea lions swarmed around us, stopping to peer into our faces, and occasionally giving us a friendly nudge or a painless nip on a flipper or leg as if inviting us to play with them," stated Braun. 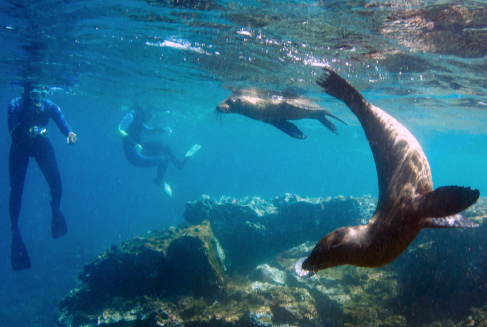 Differing from their brethren who live primarily at the South Pole and on the edges of the Antarctic continent, the Galápagos Penguins are the only penguin species that can reside in the temperate climate of the equator. They too are engaging and not afraid of humans, as evidenced in this video when these tourists approach a group of Galápagos Penguins sun bathing.

Blue-footed Boobies are aptly named, and males take great pride in showing off their brilliant blue webbed feet during the mating season. It's been said, 'the bluer the feet, the more attractive the male.' Here you can see them strutting their stuff during their infamous ritual dance.

According to Zodiac Tour operators, all the animals on the island are "incredibly unafraid of humans." However, visitors are asked to stand at least six feet away from the animals at all times. It's surprisingly easy to break this rule as the animals don't shy away from visitors. But, if an animal approaches and comes within the six foot barrier, tourists are required to step back. 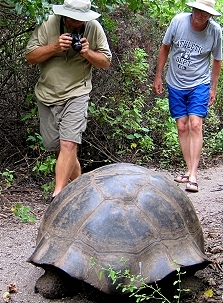 While it's been widely publicized that Galápagos Tortoises can live to well past the century-mark, who knew that humans residing in the same habitat are also known for long life. Vilcabamba, Ecuador is best recognized for the longevity of its town's folk, with residents boasting lives of 100 years-plus. Perhaps the reason for this is the peaceful co-existence man has struck with his animal friends, and that this balance of nature allows all species to slow down just enough to smell one the country's other national treasures - its rose! Living large, living long and loving thy neighbor appears to be the golden rule in the Galápagos! 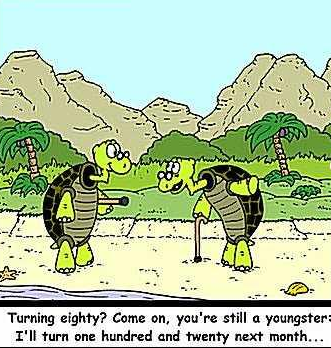 Exotic Pets
News Stories
Tortoises
A Pangolin Doing What Pangolins Do -- The Animal Video Of The Day!!!

A Goat On A Hippo?!?! The Animal Video Of The Day!!!
Pets In Show: 10 Awesome International Pet Shop Signs