Wildfire! Prepare Your Pets For Evacuation

Do you have a plan in place to rescue your pets in the face of an emergency? With hurricanes, tornadoes, and wildfires in season you want to be able to keep the whole family together -- including the furry or feathered ones. A plan for pet disaster preparedness is an essential part of being a good pet owner. Just throwing Rover in the back of the minivan and taking off isn't exactly being prepared.

The ASPCA recommends having a bug out bag or "Evac-Pack" for your pet ready at all times.  Keep this bag or bags as close to the exit as possible since you may not be allowed time to gather things together when the evacuation call comes. Items like food and water need to be regularly cycled out about every two months. For a recommended list of items to have packed and ready click here.

When you create a plan, make sure that you take in the worst case scenario. It is better to be over prepared rather than under. While you need to have a strong plan for leaving home, you also need to have a plan for where you go from there. This may depend on the type of emergency you are likely to face. In the landlocked Western U.S. you don't need to plan for hurricanes, but your location may require plans for wildfire and flash floods. In the Midwest flooding rivers and tornadoes may send you running. So having plans for high ground, alternate shelter, and alternate locations may all need to be planned.

What if something happens to keep your perfect plan from going perfectly? Murphy's Law is just as applicable during an emergency as it is at any other time. You may need to be prepared to change the plan as things proceed. 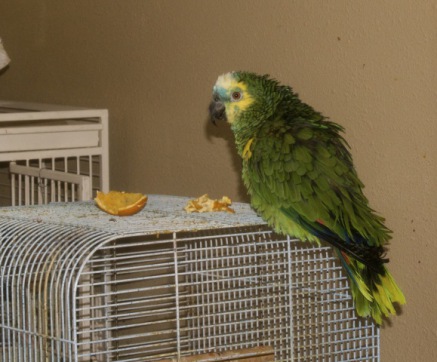 immediately,
Roger Mordhorst had to leave his beloved Blue Front Amazon parrot, Buster, behind. It wasn't for a lack of planning, but because of Buster himself. Apparently sensing the urgency happening around him, Buster would not get in his travel cage. He would flap his wings and squawk, Roger explained in an interview with Petslady.com. He finally had to put Buster in his regular large cage, fill the food and water dishes, and leave without his pet.

The Fourmile Canyon fire was the worst in Boulder County, Colorado history. The smoke plume was so large that it could be seen from space.  Things were not looking good for Buster. Fortunately, there was still something Roger was able to do for Buster. First, he left the door to the house unlocked, just in case. He figured he would be allowed to return home soon, but couldn't be sure. Several days later he was still at the home of a friend and beginning to worry about Buster. Roger contacted the Humane Society of Boulder Valley and let them know that Buster was home alone.

Rescue workers from the American Humane Association's Red Star Animal Emergency Services team that had been deployed to help with the situation picked up Buster and other animals that had been left behind. Since it was Labor Day weekend, many owners had been away from home and were unable to return to pick up their pets.

The rescuers placed Buster in a cage they had brought for him. The poor bird had become so lonely that they had no trouble getting him into the cage. In the van full of cats and dogs, Buster, so happy to not be alone, talked and laughed excitedly to his new human heros, making them laugh over his comments. His favorite phrases include "what's up doc?" and "how you doing, Buster?" His laughter was mimicked from his owner's daughter when she was a baby. It was a happy ending for the parrot and his pal. Buster had become very attached to the rescue cage. Roger was allowed to keep the cage and it is now part of Buster's daily world (see photo).

To help you create a plan in case of any type of emergency, you can go to the American Society for the Prevention of Cruelty of Animals (ASPCA) website or the Federal Emergency Management Agency (FEMA) website.Your local animal shelter may also have recommendations specific to your area.

Regardless of the plan you assemble, there is one important thing to remember: Pets are unlikely to survive on their own, even in the wild. They need you no matter what the circumstances.