The last of Mongolia's Przewalski's wild horses was seen on the steppes
there in 1969. Since then they have existed only in captivity. A
breeding program in the Czech Republic is striving to return the animal
to its native habitat. From cave paintings found in France, it is
believed that the horses lived throughout Europe 20,000 years ago, but climate change pushed them back into Asia, which became their permanent home. 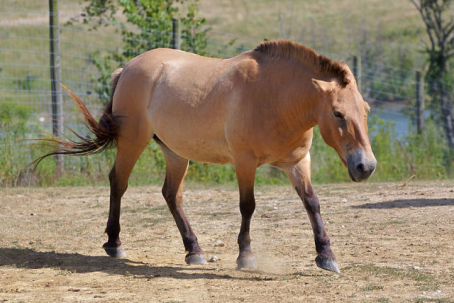 In 2011 four mares were sent back to the Mongolian steppes to be released into the wild. Two of those four have foaled as a part of producing a whole new generation of the horses in the wild. This year four more mares, aged three to five, will be loaded up in wooden boxes and flown to Bulgan. Bulgan is about 200 miles north of the Mongolian capital of Ulan Bator. From there they will travel by truck to Gobi B, a national protected park.

Their survival is not a sure thing. During the severe winter of 2009-2010 the population of the endangered horses in the wild was decimated, going from 150 to just 49.

The horses slated to be returned to Mongolia are selected to be the right age, strong genetics, and excellent health. They are also selected for being unlikely to be adversely affected by stress. All of these characteristics help to create a successful transition into the wild. The goal of the program is to create sustainable conditions for the horses, as well as for the people who live nearby. 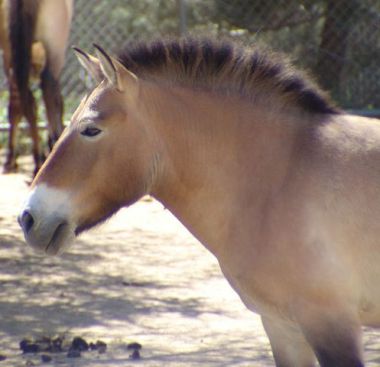 Przewalski's Wild Horse (Photo by Drew Avery/Creative Commons via Wikimedia)Most wild horses in the world today, such as Mustangs in the U.S. and the Australian Brumby, are actually feral horse populations descended from domesticated horses, rather than being a native wild horse. Przewalski's wild horses are the last surviving subspecies of wild horse, and were never successfully domesticated. Recent DNA analysis suggests that the modern domestic horses and the Przewalski's horse parted genetic ways about 160,000 years ago.

Europeans only discovered the stocky little horse with the thick neck and large head late in the 19th century. The Russian explorer and geographer Nikolai Mikhailovich
Przewalski was the first to find them in the mountains bordering the Gobi Desert and it was for him they were named. It was hunting and loss of habitat that brought the horses to the verge of extinction during the 20th century. The dawn of the 21st century has seen them upgraded from extinct in the wild to seriously endangered, and now to endangered. It remains an uphill climb for both the horses and conservationists.

There are now about 1,500 Przewalski's wild horses in the world today, most in zoos and captive programs. Of those, about 250-300 live in the wild.