On Monday authorities in Mexico City confirmed that wild or feral dogs
running loose in a park on the edge of the city have killed four people.
The Cerro de la Estrella, a partially wooded, hilltop park is
surrounded by a 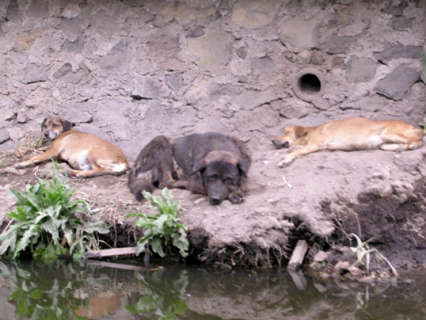 Feral Dogs in Mexico (Photo by Rick Hall/Creative Commons via Wikimedia)district of the city's poor. On December 29, 2012, the
bodies of a 26 year-old woman and a 1-year-old child were found mauled
in the park. On January 4, 2013, visitors to the park found two more
bodies there.

Due to the extent and gravity of the wounds inflicted on the victims authorities believe that at least ten dogs were involved in the attacks.

One of the victims from the January 4 attack apparently called her sister during the attack saying that she and her boyfriend were being attacked by dogs and pleading for help. In spite of this phone call, the sister is not convinced that the attack was the work of dogs.

A team of at least 100 police officers were dispatched to the park to capture the wild dogs that are living in caves and crevices there. Many of the animals appeared to have been domestic pets at one point, indicating that they were likely abandoned.

Experts are testing the dogs to see if they were involved in the deaths.

Dogs
News Stories
Our Pets’ Allergies Are Nothing To Sneeze At
The Easy To Use & Easy To Read Electronic Pet Scale
PetsLady's Pick: Funny Pope Pug Of The Day