Wild and Woolly: Elephant And Sheep Are BFFs

Themba the elephant was orphaned when his mother fell off a cliff when
he was just six months old. He was rescued by humans and taken to the
Shamwari Wildlife Rehabilitation Center in South Africa. Since baby
elephants nurse from their mothers for up to two years and Themba
wouldn't take the bottle he was in danger of starvation -- that is until
he met Albert the sheep. 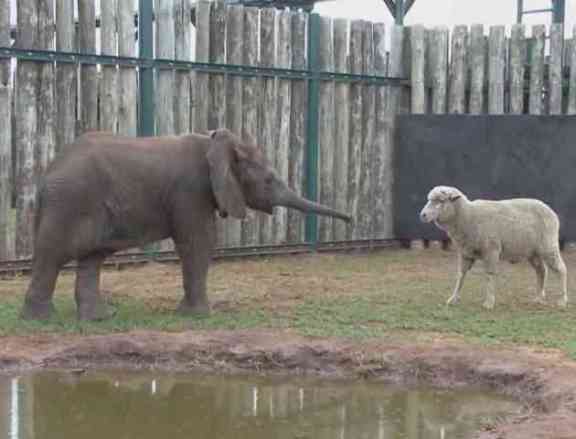 Themba and Albert (You Tube Image)

Elephants are very social and often become depressed when they lose a loved one. The vets at the Center decided to try getting a sheep to help Themba out of his funk but they weren't at all certain that it would work. They had tried it successfully once before, but that had been with a rhinoceros. It was a chance they had to take.

According to Lynda Davies, a filmmaker documenting the pair, said that when Albert was let into Themba's enclosure "All hell broke loose!" It wasn't a very auspicious start to the relationship. The elephant began to chase the sheep around, and through, his little watering hole. Fortunately there was a little safe area for Albert to rest and catch his breath. The workers at Shamwari were just delighted to see that Themba was taking an interest in something. 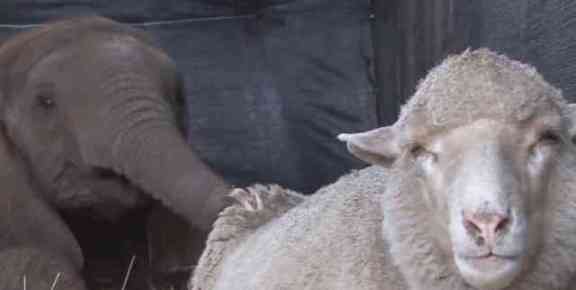 Themba and Albert Relaxing Together (You Tube Image)

Within 24 hours the elephant and the sheep were best buddies, complete with cuddles and naps together. Shortly after the pair made friends the little elephant started taking milk. That was when the staff gave him his name -- Themba. It means hope.

There was some initial concern that Themba would start acting like a sheep, but Albert is the one who has taken on elephant traits. The sheep will even eat the leaves of acacia trees -- something unheard of among sheep, but a common part of the elephant diet. 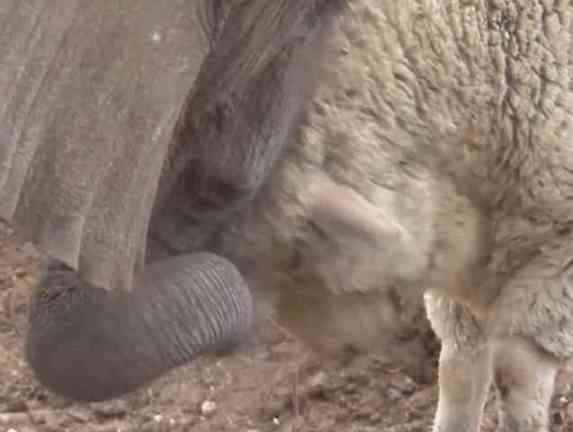 The duo became a trio for a short time when Melvin, an abandoned baby giraffe, joined them as he grew strong enough to be release back into the wild.

The plan all along was to get Themba to the point where he could be released back into the wild and when he was two years old they began taking steps to prepare the elephant for the transition. The first step was to put Themba and Albert in separate enclosures where they could see one another, but not have their same level of interaction. This seemed to be good enough, though they both slept close to the shared fence at night.

Another part of the preparation was to get Themba used to the trailer that would transport him back to his home herd. A few days into the plan tragedy struck and Themba fell seriously ill. He died of a twisted intestine. The staff buried him under his favorite acacia tree, not far from his favorite dam.

Albert was left alone, but the plucky sheep has kept going and has helped other orphaned animals at the center in their journeys to survival. While no other animal will ever quite replace one small elephant in his heart, he continues to share his love.

The full documentary on Themba and Albert can be seen here;

Cute
Elephants
Fun
News Stories
Rescue
Weird, Odd or Bizarre
Light Up Your Thanksgiving In A Fowl Way
Enjoy This Boo This Halloween
PetsLady's Pick: Cute Christmas Monkeys Of The Day
When Times Get Rough, We All Need Something To Hug: HuggleHounds® HuggleFleece™ Dog Toys
Comments