Why Sharks Don't Need To Brush

It will come as no surprise to anyone to learn that sharks have really
strong teeth. Researchers have been looking into exactly how strong and
what makes them that strong and cavity-resistant. The in-depth look at
the sharks' pearly whites show that they come already loaded with the
fluoride that we seek to add with toothpaste and mouthwash. 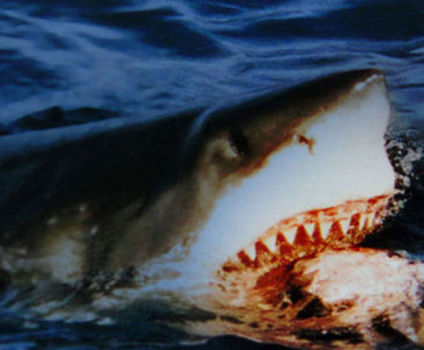 According to a study recently published in the Journal of Structural Biology, sharks never suffer from cavities and their teeth are perfectly suited to ripping apart their prey. It was found that the shark teeth contained the mineral fluoroapatite (fluorinated calcium phosphate). This means that the shark teeth are covered 100% by fluoride.

The researchers involved in the study looked at two different shark species: the shortfin mako shark and the tiger shark. These two sharks were selected because of their different approaches to feeding. Shortfin makos tear and tiger sharks cut. It was discovered that the teeth of both possessed a similar chemical and crystalline make up. They also had tooth enamel of a highly mineralized material, and the interior contains dentin, similar to human teeth.

It turns out that shark teeth are no harder than human teeth, a fact that the researchers found surprising given the differences between the two. The thing that really makes all teeth so hard is really the fact that teeth are made of tiny crystal structures arranged in such a way that they make the teeth mechanically stronger. A small amount of protein in the teeth also gives them some elasticity to keep them from being too brittle. Brittle teeth would be prone to breaking.

Sharks have long been known to be able to regenerate new teeth as teeth are lost several times during their lives. What this research shows so far is that sharks have evolved to have teeth that will do the job they were meant to do.

Byron The Dog Gives Woman Back Her Life
Comments