Who Stresses Out More In Performance, The Rider Or The Horse? 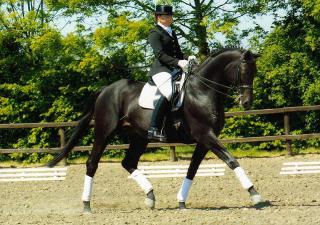 Dressage horse and rider: image via best-horse-photos.comCompetitive riders, whether they are racers, jumpers, or dressage riders, are often worried that their anxiety before a race or show is communicated to their horses, thereby stressing the animals out.  A recent study conducted at the Graf Lehndorff Institute for Equine Science in Neustadt, Germany, tested show horses to find the answer.

Mareike Becker-Birck and her research team tested cortisol levels, heart rates, and heart rate variability of 8 geldings from the French National Equestrian School in Saumur and their riders before and during dress rehearsals and performances.  All events took place at the school in Saumur, so the location remained a constant.

Though cortisol levels were higher in the horses on performance day than on rehearsal day, they did not affect the horses' cardiac readings, according to the researchers.  In fact, they surmised that the higher cortisol readings were do to more people coming around before the show to examine the horses.

"The presence of an audience caused more pronounced sympathoadrenal activity in
riders than in the same tasks without spectators," Becker-Birck said. "So the
spectators induced an acute stress response in the riders, but at the same time
(caused) no additional stress on the horses."