Who Came First: The Beluga Whale Or The Swedish Chef? [Videos]

Who came first? The Muppets' Swedish Chef or San Diego's Beluga Whale? While some say the Sesame Street character was inspired by the TV personality "Chef Tell," new research may indicate his chef-speak was patterned after the sound first uttered by a captive Beluga Whale dating back to 1984. Or was it the other way around?

In determining who came first- the chef or the whale, one has only to listen to Chef's gibberish. Whilst he cooks up one of his famous dishes he's often caught singing his songs in a mock Swedish accent, often followed by his signature utterance, "Bork, Bork, Bork!" In this well-known battle with a turtle (over 2.4 million views on YouTube), Chef attempts to turn his freshly caught prey into turtle soup!

In the wild, this male Beluga Whale not only sounds eerily human, it actually resonates with the voice patterns that could be mistaken for the Swedish Chef (albeit a submerged Swedish Chef).

There were plenty of opportunities for Noc to hear human speech in the San Diego Bay. He had previously overheard people talking at the surface, but no one could specifically cite whether or not these folks were listening to Sesame Street at any time.

In a rigorous test to see if Noc could mimic humans, scientists rewarded him with snacks when he made those sounds, prompting him to do so enough times for them to capture recordings.

Anecdotal reports have surfaced in the past of whales sounding like humans. For instance, at Vancouver Aquarium, keepers suggested that a white whale about 15 years of age had uttered his name, "Lagosi."

Then as quickly as they came, Noc's speech-like sounds subsided after about four years, after he matured. Still, he remained quite vocal in other ways for the rest of his 30-year life. (Noc passed away five years ago.) And perhaps dying with him was the secret of whether or not Noc was truly a Swedish Chef fan!  Your thoughts, readers? 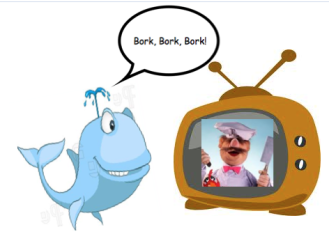