Yes, there really is a bird under all of that even though he looks more
like an exotic desert. His name is Whipper and he is just a parakeet.
Well, a very famous mutant parakeet that lives in New Zealand and
overcame tremendous odds to survive. This little budgie has become known
around the world for his totally wild do. 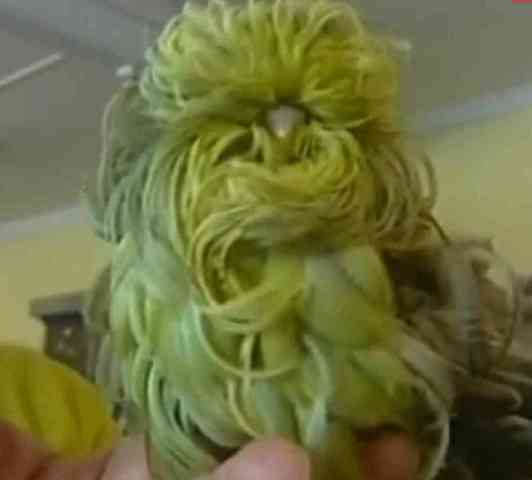 When Whipper was born he was rejected by his mother for being so different and was even thrown out of the cage twice. Luckily his owner, Julie Hayward, was not so easily put off by his moptop looks and rescued him. She has taken very special care of him ever since.

In addition to his curly coiffure of long feathers, Whipper also makes vocalizations that are unusual for his kind. His vet was the one who determined that he was a genetic mutant. His feathers are reportedly very soft and the little noises he makes are quite pleasant. This may stem partly from being separated from other budgies at such a tender age.

Mutants often have health issues that can make life difficult for them. For Whipper he also differs from his fellows by having short, flightless wings, and he is apparently blind.

PetsLady's Pick: Funny Gang Of Pigeons Of The Day
Hibernate In Winter, Estivate In Summer: Which Animals Do What?