Which Came First: The Rooster or the Hen? 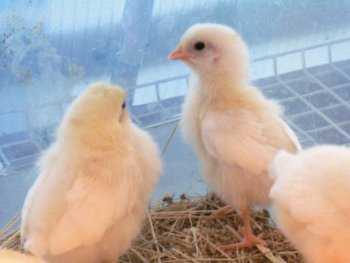 While the human controversy over gay rights and gay marriage continues to rage in the headlines, what about the chickens? Yes, chickens. There is a controversy in the hen house about whether or not there are transgendered or hermaphrodite chickens that can change sex. Some are quick to say no. Others will say that a hen will take on the appearance and role of rooster when there isn't one, but can't fertilize eggs. Others say that these are "hensters" and retain the traits of both, but are infertile. That means that a chicken that appears to be a rooster can still lay an egg. That would be the equivalent of a human male getting pregnant and giving birth. Wouldn't we love to see that happen!

Mother Nature is one whacky broad. She must be a Libra, because when she finds imbalance she will do what she can to create balance. So in a single-sex environment, she sees a need to meddle and even things out.

Just ask my neighbor and fellow urban farmer, Isabel Sanchez, who is raising chickens in the upscale city of Boulder, Colorado. Raising chickens is allowed by city code, but no roosters are allowed within the city limits. Her tiny urban farm is in one of the less chic neighborhoods tucked away among the affluent and trendy. Okay, we live in a trailer park. (Pause, please insert your own trailer park joke here. Please don't say 'trailer park trash,' in Boulder we are 'manufactured home debris.')  Almost the entire park is more new age/ earth mother/ granola than the stereotypical redneck, poor white trash mobile home community. Isabel, her husband, and their children try to raise as much of their own food as possible on their tiny plot of land. So they adopted nine hens to supply eggs for the family of ten. With a tentative blessing from the homeowners association, and many misgivings on the part of the neighbors, she purchased nine hens and set up hen housekeeping.

After several months of harmony among the hens and controversy among the neighbors, a rooster took place. How did this come about? Was it the idea of just one hen or did they get together and vote one of them into power? Perhaps this one hen, while a chick, had failed to gender-identify with its mother. Even science is unsure about how this happens. Some suggest that all chickens are transgendered and respond to the needs of the flock. It does seem that they do agree that hormones are involved. Gee, what a surprise.

You may say that she must have had a rooster all along, however it was a laying hen before the change. The resulting rooster was also fertile. She has the chicks to prove it (see photo). After a little crowing about his success, and a "fowl" on the play called by the neighbors, the rooster flew the coop and was transferred to a maximum-security farm nearby. There he can be the rooster she was apparently meant to be.

Others have also reported a sex change among their pullets.  Roosters have also been known to change to a hen when the role is already adequately filled by a more virile specimen of male pulchritude (or is that poultritude?). It certainly changes the meaning to the phrase "going off half-cocked."

This leads to another question. If hormone changes can cause a shift in gender, do hens also go through menopause -- or would that be henopause?