When Things Get Too Close For Comfort "Animals Strike Back"

If you're hankering to see wild animals attack human interlopers. then this Friday's ABC special, a 2-hour 20/20, should be right up your alli... gator.  But "When Animals Strike Back" is not just for voyeurs...

The show shares some gruesome videos of animals on attack, and interviews victims of alligator, raccoon, shark and other animal attacks. 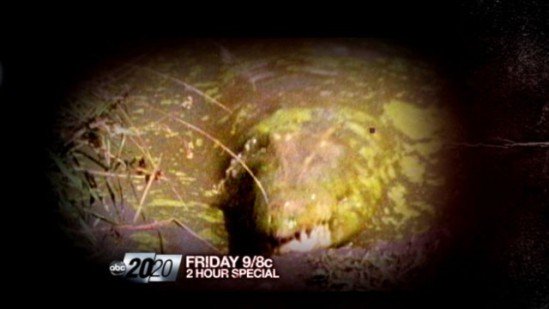 "When Animals Strike Back" on ABC's 20/20: ABC-TV promotional photo

But the show also attempts to answer some very important questions: Why do animals attack humans? Are humans trying to get too close to wild animals?  Why do humans try to domesticate wild animals?

When Animals Strike Back airs from 9:00 to 11:00 Friday, July 20, 2012 on ABC. It takes viewers through human and animal habitats in the U.S. and abroad, and reports about the safety of captive animals in managed institutions.