Goats in Morocco seem to be a little different than your average goats.  They are known for getting to the top of trees to get the fruit that cannot be reached from the ground.  Rather than flying to the nearest branch like a bird, they climb up and then carefully hop from branch to branch.  The tree climbing goats are a tourist attraction to those visiting Morocco. 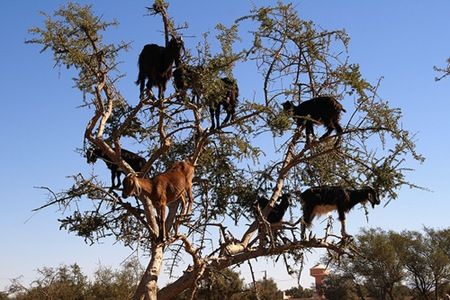 Rather than flying, the Moroccan goats climb the gnarled truck and hop from branch to branch.

These goats aren't just climbing any trees though.  They prefer the diminishing Argan tree that is on the verge of extinction due to overgrazing and being cut down for firewood.  The goats prefer the taste of the Argan tree fruit and leaves over other options.  In the dry climate food can be hard to find, hence the goats extreme actions of climbing the tree for the tastey fruit.  The goats have become acclimated to the difficult hunt for food and many think this is how they started to look for food at the top of the trees.  The twisted and thorny texture at the trunk of the tree gives the goats a good base to start their climb. 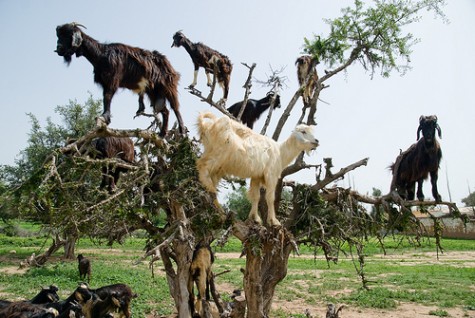 Herds have to take turns letting each goat have a chance to climb to the top in search of the best fruit.

The goats climbing to the top of the tree to eat the fruit is only the beginning to the oddity of this story.  As the goats eat the berry like fruit, their so-called valuable droppings fall to the ground.  In past generations, women would collect the kernel like droppings and grind them up to make Moroccan Argan Oil.  The oil is valuable and ninety percent of it is exported to other countries.  The oil is used for dry skin, hair, and other health remedies.  Now a days the women have a more sanitary way of making the oil.  The fruit is shelled by hand rather than waiting for a goat to digest it. 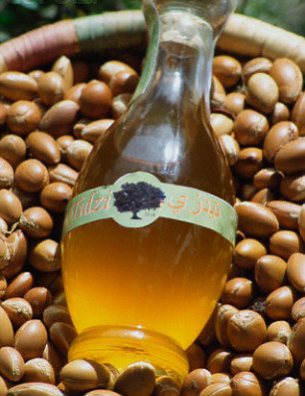 Argan Oil is used in many countries to make cosmetics and foods.

The Moroccan goats aren't worried about the health benefits of the Argan fruit though.  They are concerned about survival and when their turn will come again to climb the tree.  With so few trees available the herds must take turns getting up the tree for food.  Some pictures have shown up to nine goats in one tree at a time.  The goats have made such an impression around the world that a calendar was made in their honor and consumers have been scooping them up in preparation of the next year. 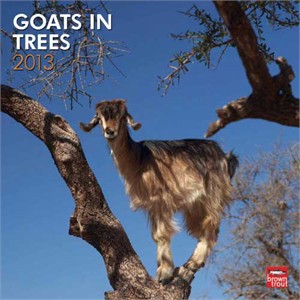 Goats in trees calendars have become a bizarre, but popular show item to display in the office.

Are These Elephants Fighting? The Animal Video Of The Day!!!

What is a Mantis Shrimp? The Funny (But Quite Informative) Animal Video of the Day!!!
Comments