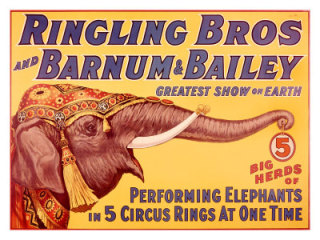 As we acknowledge some of our fondest childhood memories, I’m sure you'll agree, there's a common denominator for most of us. Those were the special times when our parents treated us to a day at the circus. When Ringling Bros. and Barnum & Bailey came to town it was an event for the young and old to behold --  particularly if it was proceeded by the pomp and ceremony of an exhilarating parade marching through town.

Well, while circuses still exist in the 21st Century, fortunately there is one animal that will soon be eliminated from the Greatest Show on Earth’s illustrious cast. The elephant, a long-standing symbol of this particular circus for more than 144 years will in a few short years, no longer be featured in one of its starring roles.

Executives from Feld Entertainment, Ringling's parent company, said in a release that the 13 elephants currently traveling with its circus units will be retired in 2018. At that point in time, they will join the 40 currently under care at the 200-acre Ringling Bros. Center for Elephant Conservation in Florida.

"The Ringling Bros. Center for Elephant Conservation is already home to the largest herd of Asian elephants and the most successful breeding program for this endangered species in the Western Hemisphere," the organization said in a statement. "The circus will continue to feature other extraordinary animal performers, including tigers, lions, horses, dogs and camels."

The reason the RBBB Circus will phase out the show's iconic stars was based on the growing public concern about how the animals are treated. Executives from Feld Entertainment, Ringling's parent company, said the decision to end the circus's century-old tradition of showcasing elephants was difficult and debated at length.

“There's been somewhat of a mood shift among our consumers," said Alana Feld, the company's executive vice president. "A lot of people aren't comfortable with us touring with our elephants."

The Feld organization now owns 43 elephants, and 29 of the giant animals live at the company's 200-acre Center for Elephant Conservation in central Florida. Thirteen animals will continue to tour with the circus before retiring to the center by 2018. One elephant is on a breeding loan to the Fort Worth Zoo.

Another reason for the decision, company President Kenneth Feld said, was that certain cities and counties have passed "anti-circus" and "anti-elephant" ordinances. The company's three shows visit 115 cities throughout the year, and Feld said it's expensive to fight legislation in each jurisdiction. It's also difficult to plan tours amid constantly changing regulations, he said.

From a purely business standpoint, the circus organizers are going to have to create a whole new marketing strategy since elephants had been so prominent in their advertising and promotional campaigns up till now. Kenneth Feld said: "The symbol of the 'Greatest Show on Earth' is the elephant, and that's what we've been known for throughout the world for more than a hundred years."

When asked by a lawyer whether the show would be the same without the elephants, Feld swiftly replied, "No, it wouldn't."

But guess what — as with the eccentric carny side shows of the past that featured bearded ladies and other human oddities such as were recently highlighted on the FX TV Show, “American Horror Story: Freak Show” - nothing lasts forever. But like the world of the theater - the Greatest Show on Earth must go on - even if it’s - indeed, without its number-one headliner!

Brazen Thief Lops Off Elephant Tusk With A Chainsaw!
Comments