What's (On) My Line: The Top 10 Weird & Bizarre Fishing Lures 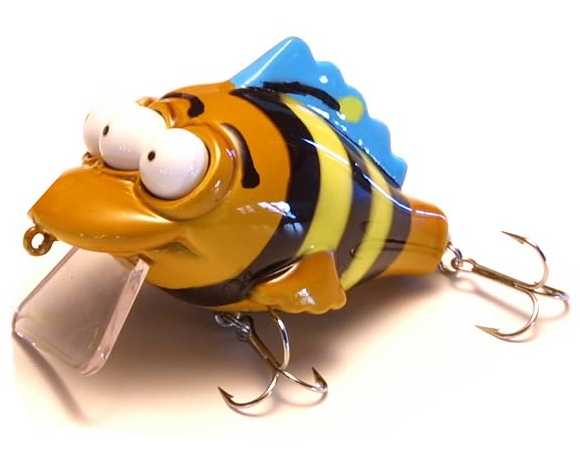 The Simpsons' Montgomery Burns may not have thought a three-eyed fish was very appetizing but for other fish it's simply a matter of “the more eyes, the merrier.”

One other reason for employing the Blinky Bumblebee lure is that fish often congregate in the warm coves and bays where nuclear power plants discharge their waste water. Hey, your three-eyed fish lure just might help you hook a real three-eyed fish! (Bizarre fishing lure image via Entertainment Earth) 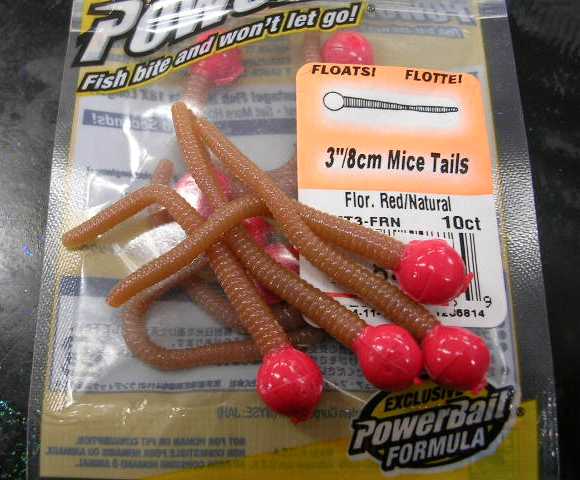 Rat Tails (the hairdo) may be out but Mice Tails are in! Not only that, they seem to be a proven effective lure though the occurrence of actual detached rodent tails in the world's rivers and streams has to be somewhat rare.

Berkley makes several different varieties of Mice Tail lures besides the slightly gruesome style above. Chose “White/Bubblegum” if you're a sensitive type. (Bizarre fishing lure image via Fishing Is Life) 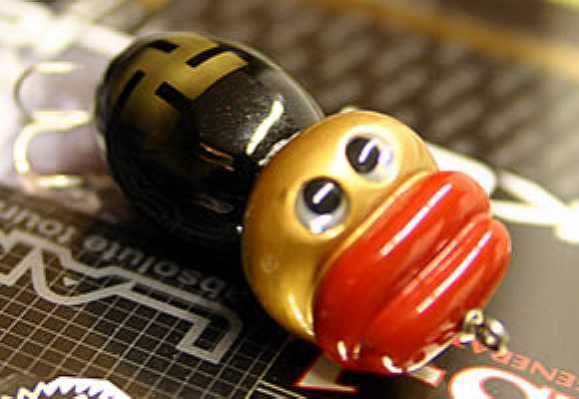 Secret fishing weapons of the Third Reich? Nein way, Jose! Close inspection of the lure reveals the swastika on the red-lipped critter's back is the original “lucky” version, not the inverted perversion co-opted by the Nazis.

None of this matters to fish, of course, unless the fish happens to be The Incredible Mister Limpet. (Bizarre fishing lure image via Tarakito) 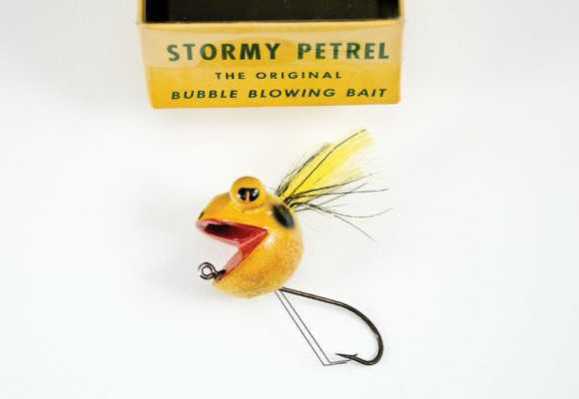 Created by the Tropical Bait Co of Indianapolis, IN, the bulging-eyed Stormy Petrel was channeling Pac-Man before Pac-Man was cool... actually, before Pac-Man even existed. What's more, according to its box the Stormy Petrel was “the original bubble blowing bait.” Accept no imitations, folks, because the fish sure won't. (Bizarre fishing lure image via LiveAuctioneers) 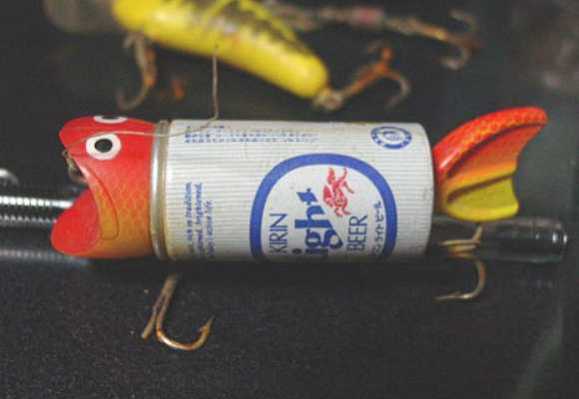 Here's an unusual lure from Japan that seems to feature a frightened-looking fish stuck in a beer can... either that, or it's a supremely confident fish who's fashioned a working suit of armor from the ocean's flotsam. Brilliant!

What sort of fish would a fisherman employing such a lure be hoping to catch? Boston Brewfish, perhaps, or a nice Salmon Adams. (Bizarre fishing lure image via Dokuo) 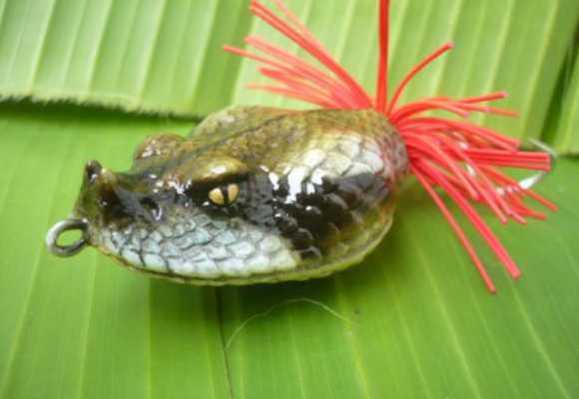 There are lures that take the form of entire small snakes but a disembodied head? Maybe the fish know something we don't, or the animal kingdom has its very own Al Qaeda cell. (Bizarre fishing lure image via ThaiFairShop) 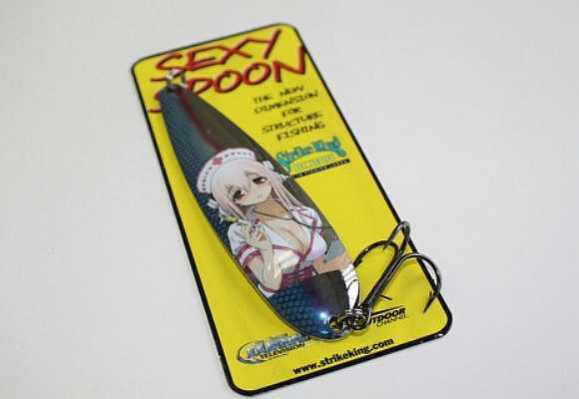 Super Sonico is Japan's latest virtual idol and the pneumatic character is rapidly branching out from her core competences as a fashion model, musician, and video game star.

Once confined to the Akihabara scene and Japan's murky stew of otaku culture, virtual characters like Super Sonico are making names for themselves far beyond Japan's borders. There's even a market for a Super Sonico “Sexy Spoon” fishing lure, or at least the folks at StrikeKing seem to think there is. Crusty old fishing traditionalists can only hang their heads and weep. (Bizarre fishing lure image via Unagi-inu) 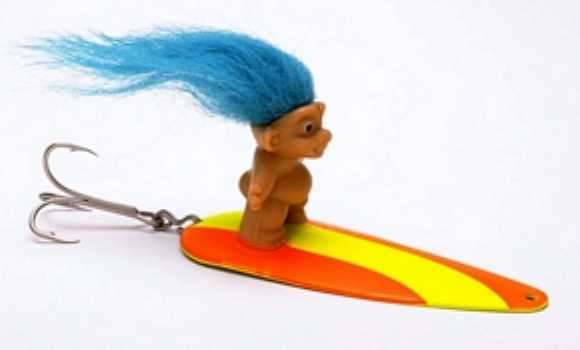 Sven & Ole describe their Miracle Fishin' Loors by stating plainly, “If it catches a fish, it's a miracle.” Maybe they're just trolling us... and one look at their Trolling Lures takes the “maybe” right out of the equation.

It gets better (or worse, depending on your POV). Sven & Ole stock two variations on the Original Trolling Lure: the ultra-blonde Spinning Swede and the Surfing Norwegian above that sports a flourish of blue-hair. The website notes that “hair color may vary, yust like my wife's”. (Bizarre fishing lure image via Sven & Ole) 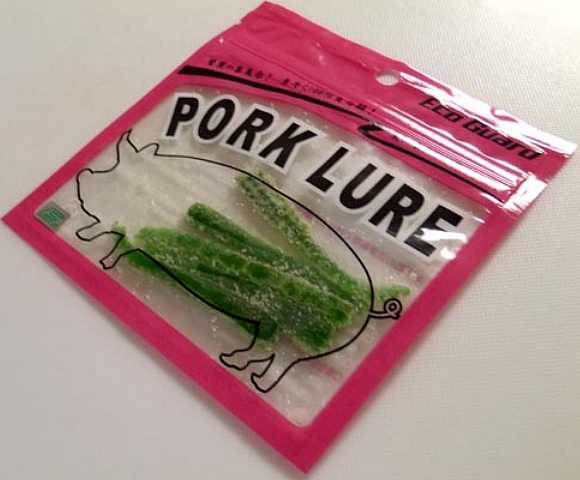 Who doesn't love the sweet, succulent, seductive flavor of bacon? Nobody, that's who... well, aside from some vegans who don't know what they're missing. Fish love bacon too, or there wouldn't be such a thing as Pork Lures.

We're not sure exactly why fish would be attracted to pork, maybe there's a species known colloquially as the Baconeater. Regardless, this lure should be effective anywhere except for China's Yellow River, where 15,000 dumped pig carcasses likely dulled the local fish's senses permanently. (Bizarre fishing tackle image via Ikejima Blog) 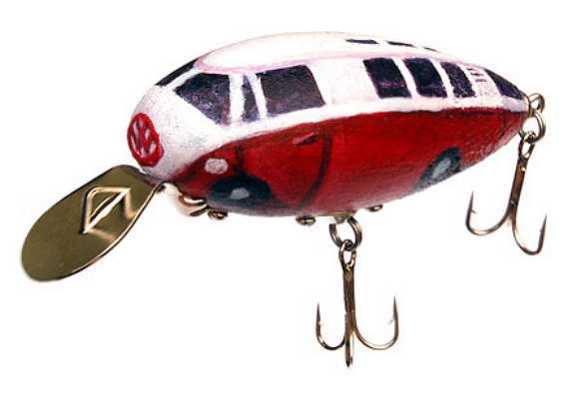 Hugh Macdonald, a UI designer for Amazon.com, designed this one-off lure for CRANKbait!'s Lures of Distinction project. Being the former owner of a 1967 VW Microbus, it's likely Macdonald was drawing on fond memories of the psychedelic Sixties... or maybe those were just flashbacks from one too many Grateful Dead concerts. It might not help land any crappies but the VW Bus Lure works like a charm with hippies... just don't operate any heavy machinery after eating 'em.

Not exactly A River Runs Through It material, though as any experienced angler will tell you, a big fish on the end of your line will do wonders to silence any criticism of your lure. That's the only fish story that really matters, amiright? (Bizarre fishing lure image via CRANKbait!)

When in the Caribbean, Keep an Eye on Your Drink; These Monkeys Will Steal It! The Animal Video of the Day!!!
PetsLady's Pick: Funny Doggie Nose Hat Of The Day