What A Physicist Might Do In The Name Of Biomimicry 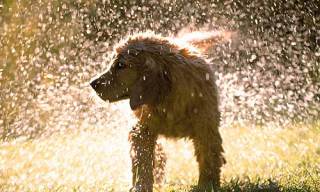 Dog drying himself off. How many times must he shake?: image via blogs.catster.comA physics grad student at Georgia Tech, Andrew Dickerson, conducted an interesting animal experiment in the hopes of it leading to a new design for a washing machine or something, perhaps, that had not been invented yet.  He studied the number of shakes it takes for various animals to dry off.

Somehow Dickerson was able to get bears, dogs, cats, and mice soaking wet and then videoed them in high speed while they dried off.  (Sounds weird, but it really was 'for science.')

Then, submitting these videos to the Gallery of Fluid Motion, Dickerson developed a formula that tells at what frequency these animals dry off - not how fast can they dry off, but at what speed and what force the animals have to shake, measured in cycles per second or hertz.

Well, I won't beat around the bear here.  What Dickerson learned, and will present to the American Physical Society (The Wet-Dog Shake), is that bears generally dry off at 4 hertz per second and a mouse at about 30 hertz per second. (Of course, there's more to it, but it will be written in physics when it's published.)

Here is some of the fascinating video, Dickerson shot...

While there may not be an immediate application for Dickerson's findings, you never know what new invention may be bio-inspired by these animals shaking themselves dry.  The videos sure look cool.

One thing Dickerson told NPR interviewer Robert Siegel is that listeners should not try to biomimick these animals. "If you were to get down on all
fours and try to shake off water after a shower, your efforts would be most
unfruitful," said Dickerson.

NPR Transcript , NPR Blogs, Bulletin of the American Physical Society  via a great tip from Steve!

A Meal Fit For a King! If the King Liked Worms... The Animal Video of the Day!!!
PetsLady's Pick: Funny Daiquiri Cat Of The Day
Comments