The ban on whale meat and meat products throughout Europe (with limited
exceptions in Greenland and Denmark), is having an effect on businesses
that appear to not be aware of the law. Last week in England a 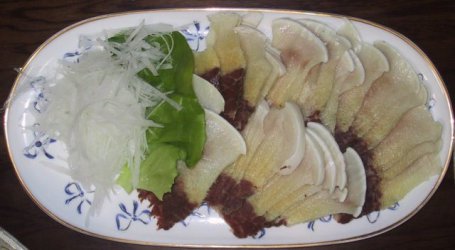 Whale Meat (Photo by Chris 73/Creative Commons via Wikimedia)trendy tavern was
raided by police because they were selling a drink that was allegedly being given a kick of flavor through the use of whale meat.

The drink is called the "Moby Dick," and is made by combining Laphroaig whisky, Drambuie, ale, bitters and a bit of what is being called "whale skin
infusion." The concoction was a pricey one -- costing in the neighborhood of £9 to £17 a glass.

Bar management admits that they had been serving the drink made with scotch whiskey that had been infused with a tiny piece of dried whale skin. One of the bar employees had purchased the bit of skin on a trip to Japan in 2011. They claim that until the raid management and employees were unaware of the legislation.

Police seized the bottle in question and sent it for analysis. The drink has since been removed from the menu and the bar management has apologized for their error in judgment and for any offense that anyone may have taken over the product.

Switzerland Sets The Bar for Animal Advocacy Globally
Baby Owls! The "I Don't Have to Tell You This is Cute" Animal Video of the Day!!!
It's Not Raining Cats & Dogs In NYC Since Pandemic Hit USA
World's Oldest Cat Celebrates His 30th Birthday Party
Comments