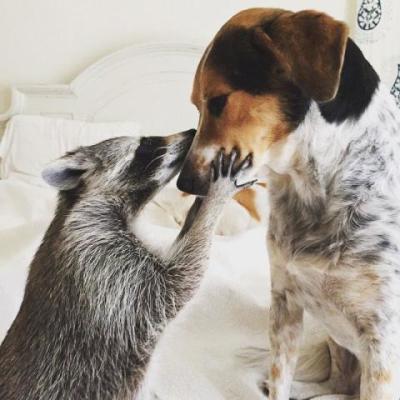 Pumpkin the raccoon nuzzles the dog she treats like a mother

It's been a busy and buzzy week for news relating to pets and wildlife.  You've got to see the Russian robo-cockroach, the raccoon who think she's a dog, and the lost chicken who was found drinking out of a London game store toilet.  Also find out why what researchers have learned about elephants may lead to a cure for cancer.  See the sweetheart of a kitty who saved her master from committing suicide. There's more, of course; check it out!

It looks like a cockroach, moves like a cockroach, and gets into small places like a cockroach; that's where the similarity stops.  This 3-inch cockroach spy can be fitted with a portable camera or other items up to 10 grams in weight without eating it.  Its role model is the Death's Head cockroach (Blaberus craniifer), seen below. It may be used in reconnaissance. If you would like to learn more about the Russian cockroach, here is a good YouTube video that explains it more fully. (via PopSci) 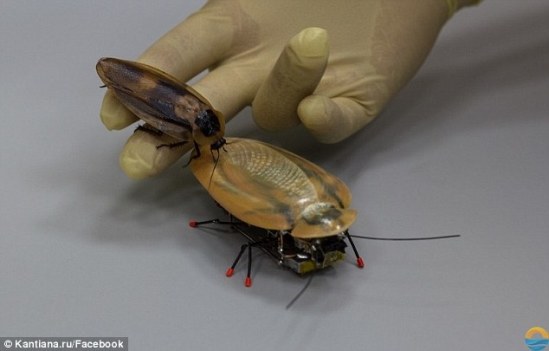 Cancer researchers have long been befuddled about the elephant; it is one of few species that rarely gets cancer.  Researchers at the University of Utah, Arizona State University, and scientists from the Ringling Bros. Center for Elephant Conservation have just published the results of a multi-year study answering this mystery.  African elephants, it seems, have a 40 copies of a cancer suppressing gene (p53), whereas humans only have two copies. Additionally, the elephant p53 alleles go to work twice as fast on cancerous cells than do human alleles.

"It's as if the elephants said 'It's so important that we don't get
cancer, we're going to kill this cell and start over fresh," said Dr.
Joshua Schiffman, M.D, pediatric oncologist at the University of Utah
Huntsman Cancer Institute. "If you kill the damaged cell, it's gone, and
it can't turn into cancer.  This may be more effective a cancer
treatment than trying to stop a mutated cell from dividing and not being
able to repair itself." (MedXpress.com) 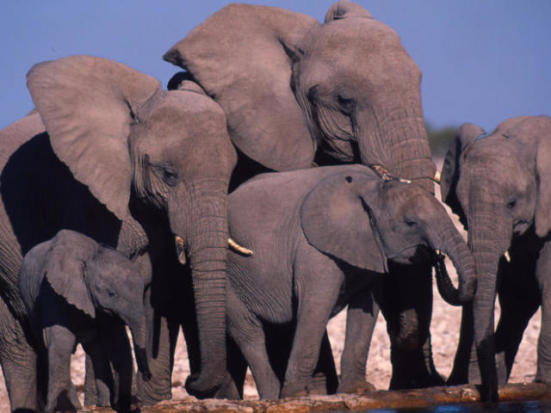 A Raccoon Thinks She's A Dog

Inside Edition did a cute story (below) on the Bahamian family who adopted a one-month old raccoon when her mother abandoned her.   "Pumpkin" has become one of the Kemp family members and an Instagram star, according to reports. Described as highly intelligent, Pumpkin is more than a handful to take care of.  Watch this usually dangerous animal act like she's a pet!

Nothing Too Big For Dubai

Dubai is arguably the most expensive city in the Middle East. It's a city that caters to tourists and is proud of the honor of having the tallest buildings, biggest markets, and best food in the area.  Now opening is one of the biggest conglomerations of pet stores - 80 of them - in one Birds and Pet Market.   Local and international laws are in place to insure that trade does not interfere with protected species.  According to Gulf News, animals that do not make good pets will not be sold at the Market. 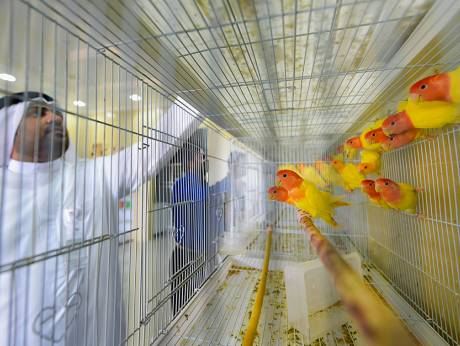 Glimpse of a bird store in the new Dubai Pet Market

How she got in, no one seems to know, but a toilet in a Cashino game store in London, became the savior of a lost chicken on her last legs, apparently.  RSPCA rescued the chicken, it named Armitage, in a severely dehydrated condition.  RSPCA representative, Lynn Marshall, said that the dehydration is what led Armitage to find the toilet, but once down there, the chicken was too weak to fly out. The chicken is being nursed back to health.(PetGazette) 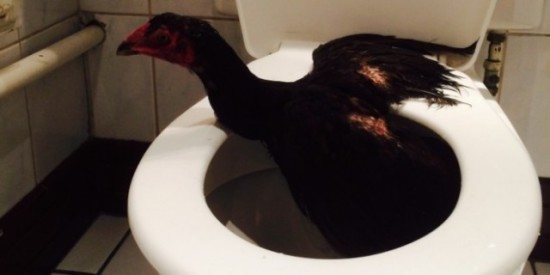 Thirsty chicken finds toilet in London game store, but is too weak to fly out.

Love Vodka? Save A Dog

If you live in Austin, Texas and love dogs, you may just end up at an Emancipet fundraiser.  There, you can donate money to the low-cost Emancipet veterinary clinics and maybe even rescue a dog.  Tito, maker of Tito's Handmade Vodka has been donating his vodka to Emancipet for fundraisers and, in addition, has set up a website, Vodka For Dog People, where you can purchase items whose proceeds go directly to Emancipet.  Tito, who has rescued 45 dogs himself, is also promoting Emancipet around the country with "yappy hours."  The partnership of a brand name company and a non-profit always makes for good business too. (Philanthropy.com) 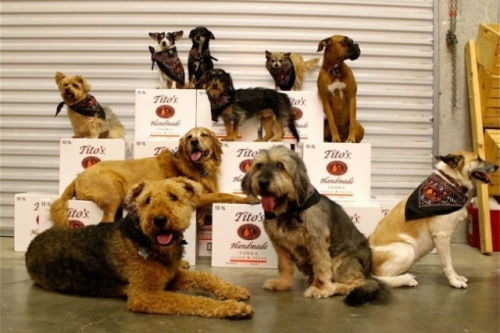 Tito's Handmade Vodka is happy to go to the dogs!

We talk about rescuing pets, but what about when pets rescue us?  This happened just a few days ago in San Francisco when a man perched on the ledge of a third story apartment window kept police negotiators busy for three hours.  Finally, the man's family suggested the police bring the family cat to the scene.  "Never underestimate the power of love between people and their pets," said Officer Albie Esbarza.  Within 45 minutes, the man went back into the apartment.  Before his arrest (for charges unrelated to his suicide attempt), the police allowed the man to visit with his cat. (PeoplePets.com) 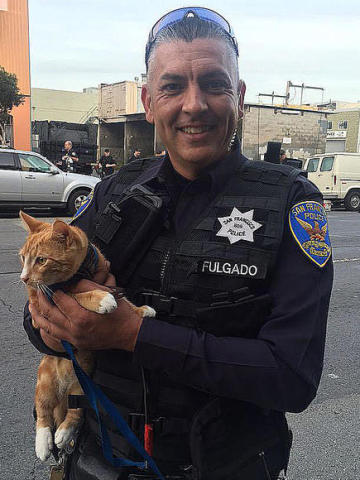 Hero cat with Officer Fulgado of the San Francisco Police

Are You Prepared To Protect Your Horse In A Natural Disaster?

Whether you are prepared for fire, torrential rain, earthquake, or other natural disaster, or not, horses need their own readiness plan.  The Horse and the University of California, Davis, Center for Equine Health have a smash-up readiness quiz and plan for horse owners that covers everything from horse identification to finding horse shelters to loading your horse on a truck.  There's more; this article is a must read and study for all horse owners! 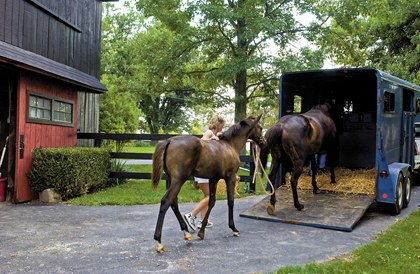 Train your horse to enter a trailer BEFORE a natural disaster occurs.

Well, that's the buzz for today!

And read these... The Buzz never gets old!

Summertime For Pets, When The Living Ain’t Easy

Want To Train A Search And Rescue Dog? Here Are 10 Basic Things You Should Know
Start Your Own Dog Walking Business
Comments