What the Monterey
Bay Aquarium achieved recently may not have been impossible, but it
certainly was difficult. They have managed to coax their weedy sea dragons
to mate and produce a brood of over 80 tiny offspring. This is only the
fourth time ever that an aquarium in the United States has managed the feat. They are now assisting the proud papa as much as they can in the care of those babies. 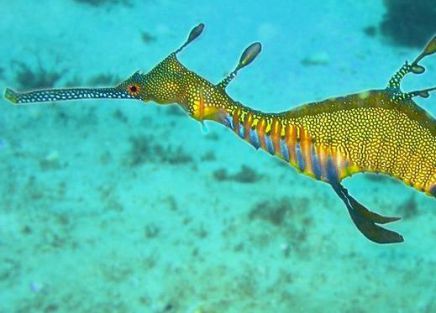 The sea dragons have been part of the special exhibit at the aquarium called "The Secret Lives of Seahorses." It was there that the father began delivering his young. The babies have all been moved behind the scenes for now so that the seahorse husbandry team can make sure that they survive and thrive.

The fact that the mating and pregnancy has taken place means that the team has managed to create a comfortable and non-threatening environment for the sea dragons to live.

Like seahorses, the female sea dragon lays her eggs onto the brood patch located on the underside of the male's tail. The male fertilizes and carries the eggs in a brood pouch for six to eight weeks before the hatchlings begin to appear. For these happy parents the babies began to emerge on July 22. The last of the eggs hatched on August 2.

Weedy sea dragons have long, slender bodies with leaf-like projections that allow them to blend in with the seaweed where they make their home in the wild. They grow to be up to18 inches long, and are generally reddish in color with
yellow spots and purple accents. They feed on tiny crustaceans and zooplankton, sucking them in through their toothless mouths.

The weedy sea dragon is native to the southern coast of Australia and the coast of Tasmania. While they are not considered threatened in the wild, they are considered vulnerable due to over-collecting for the home aquarium trade. They are protected under Australian law, making it illegal to catch them without a permit.

Once the babies are grown, some will join the exhibit, while others will be shared with other aquariums through the Association of Zoos and Aquariums.