When the city of St. Petersburg, Russia goes to the movies, it does so big time.  The Palace Bridge opens opens over the Neva River and the split bridge becomes a split backdrop offering the largest movie screens in the world, so big, that thousands of people can watch from one side or the other at the same time.  This week St. Petersburg is having its International Art-Forum GraFFFest 2012 at the Bridge, but on August 17 the city will be treated to its first viral cat video competitions - Cats In The City. 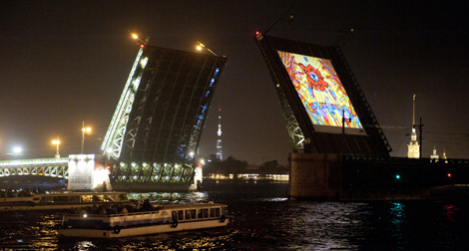 Viral cat videos, like the one below, will be shown both nights on the big screens. The videos must have been created within the last five years, be focused on city cats, have 100,000 or more views, be less than 5 minutes long, and YouTube and/or Vimeo accessible.

Skifcha, the Dubfest Hipster Cat, one of several videos make by Russian film maker Denis Borisovich has more than 1 million views on YouTube....

And guess who's going to be judging the Cats in the City competition...  Why, none other than Russia's most famous cat Zarathrustra, a great friend of PetsLady, better known as Fat Cat.  Fat Cat's human, artist Svetlana Petrova, just happens to be running the whole festival. 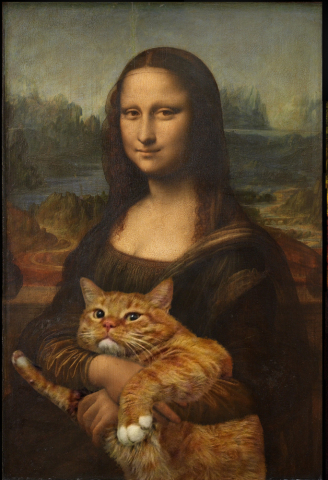 Fat Cat with the Mona Lisa: image via fatcat.ru

I bet Fat Cat's good friend Hank The Cat (running for Senate in Virginia) will also submit an entry.