Durham, North Carolina, was the site of a recent and very special meeting between soldier, Nick Peyton, and Murdock, the service dog. Peyton, aged 31, sought to start a new life as a forensic artist after his tours of Afghanistan ended in 2014, but he was plagued by relentless anxiety attacks and the inability to cope with them without the numbing effects of alcohol. (See my article on disabled vets and service dogs.)

He was on a self destructive spiral that would not have ended well until the day he met Murdock, who became his service dog and special companion via the generosity of Vets To Vets Inc. This  small, non-profit organization located in the heart of Durham, has matched dogs with twenty veterans since its founding in 2012. Now Nick Peyton feels a new lease on life. He can breathe and leave the trauma of combat in the past where it belongs. 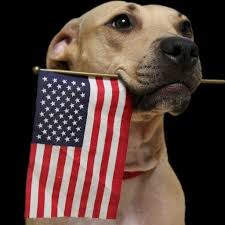 Murdock has helped Peyton expand his world by acting as a warm buffer against an environment that is still hostile and threatening. (See my article on Justin and Bond.) Explosives are everywhere, especially among big crowds of strangers where somewhere within lurks the enemy. (See Lucca: A Military Dog For All Seasons.)

Murdock goes to art classes with Peyton and sits under his desk, prepared to shove his warm and fuzzy head into his lap if he senses anxiety returning. It works and in Nick's own words: "For the first time in seven years, I"m planning to go out and see a movie. I've come a long way."

More on Vets To Vets

Founded by Dr. Terry Morris, a veterinarian and molecular microbiologist, Vets To Vets represents two groups that have long been close to her heart; namely, veterans and stray dogs. The daughter of an Air Force captain who died when she was very young, his death brought her family to Durham where her mother's family lived and helped to raise three children. A news report detailing another similar organization gave her the idea to train rescue dogs for veterans. (See my article on: Hampton Hounds for Heroes.)

Since its inception, Vets To Vets has matched twenty dogs with veterans, but it is not an easy process. The operation requires many hours of networking between veterans'assistance programs and animal shelters. Both the veterans and the dogs must indicate the potential to meet each other's needs for help and support. (See Sergeant Rocky ad Officer Andrew Brown.)

She has a high success rate and so far, in only four cases the dog and the veteran did not pair well. Still, those dogs remain in  the program and she is always on the lookout fro new owners. In Morris's own words: "When you match a veteran with adog, there's no guarantee that its going to stick, but  every dog in our program is never going back behind bars again."

Several local veterinarians help Vet to Vets by  providing free or reduced-price care for the dogs, and three organizations  have donated space for the training, in which  veterans who receive the dogs are obliged to participate.

The many skills of a service dog can include some tasks that would be trivial to a non-handicapped individual. (See: Bretagne.) These include but are not limited to: pushing an emergency call button when a veteran falls; dragging a dropped cane or crutch back into the hands of the veteran; helping to remove socks; shoes and slip-over shirts and/or sweaters. Service dogs can also be trained to help with emotional or mental challenges by offering comfort to their comapnions just by being a soft and fuzzy place to fall.

Not enough is said or written about these wonderful animals that ease the pain in the lives of those who have served this country so well.

Here's to them and Vets to Vets!