Veteran's Day: The Dogs Of War

Humans have been partnering with dogs in combat for many centuries.
Today, as we honor the human veterans of war, let us remember the
canines who also work to give their all -- just because they love us. In 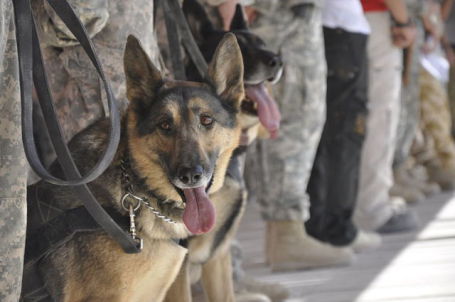 Army Dogs (Public Domain Photo)January of 2013 a national monument will be dedicated to all working
dogs, including those who have served in combat from World War I to the
war on terror. They also serve, those who sit and heel.

The honorees include Sergeant Stubby, a short-tailed bull dog whose owner, Private J. Robert Conroy, smuggled him aboard the S.S. Virginia as a puppy. They were bound for the battlefields of France in 1917.  He was able to alert his comrades early to gas attacks, located wounded soldiers on the battlefield, and even captured a German spy. After the war, as a wounded veteran, he was awarded a gold medal by Blackjack Pershing. 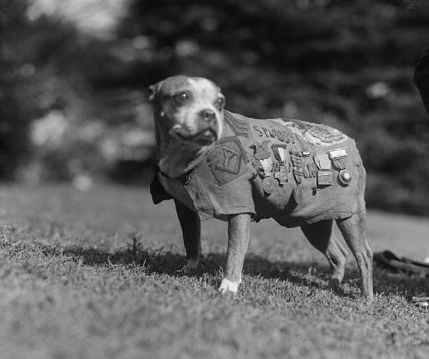 Sergeant Stubby (Public Domain Photo)Other dogs include Chips, a dog who served during WWII, in the K-9 Corps, earning a Silver Star and a Purple Heart (these were later revoked due to discrimination against dogs in the military). He served in North Africa and a number of locations in Europe. His life was also memorialized in the Disney movie" Chips the War Dog."

York acted as a scout dog during the Korean conflict, winning the Distinguished Service Award after completing 148 combat patrols without a single life lost.

Then there was Nemo, one of the 4,000 dogs who served in Vietnam. He saved his handler and countless other lives when he uncovered four Viet Cong infiltrators on the base where he was serving. He earned his unit the Air Force Outstanding Unit Award for their joint efforts.

The most recent military dog to be honored will be Cairo, a Belgian Malinois, who parachuted with the Navy SEAL team into the Bin Laden compound in Pakistan where he alerted his companions to the movements of people around the compound. His work aided in the killing of the notorious terrorist.

As we go forward many dogs are still serving in the military at home and abroad. They risk their lives daily, as any deployed soldier, seaman, or airman does. Today we salute them and their valor.