A Vending Machine For Dogs? Well, Sort Of

Stray dogs and cats are a problem throughout the world. So is the need
to recycle plastic bottles. In Istanbul Turkey, one company has managed
to put the two together to help the thousands of stray pets that roam
the street there. Pugedon has invented a sort of vending machine that
accepts plastic bottles and in turn dispenses food and water for the
homeless animals. 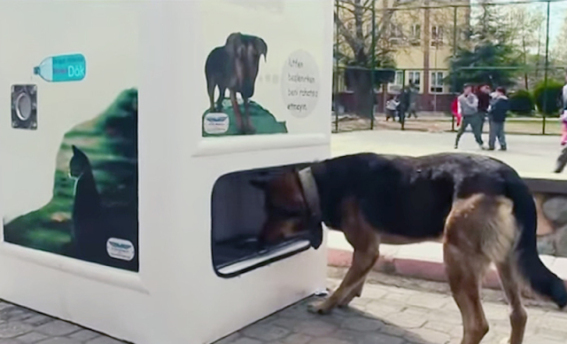 The Pugedon Smart Recycling Boxes have been placed in parks and public places around the city. When someone deposits a bottle then dry food is dispensed at the bottom. If someone has extra water to dispose of there is a place to do that to share the water with the animals. 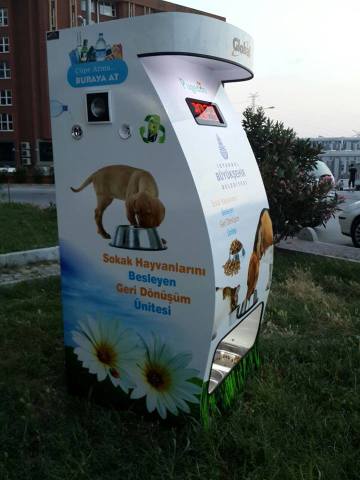 These machines operate at no charge to the city. The bottles are recycled in exchange for cash, which in turn pays for the cost of the food. This allows the machines to provide steady sustenance for the more than 150,000 stray animals that must often rely on local residents for food.

For the most part the addition of the machines is seen as making a positive change in a city where the fate of stray pets is not always a good one. On the other hand there are those who are concerned that these animals are a source of disease. 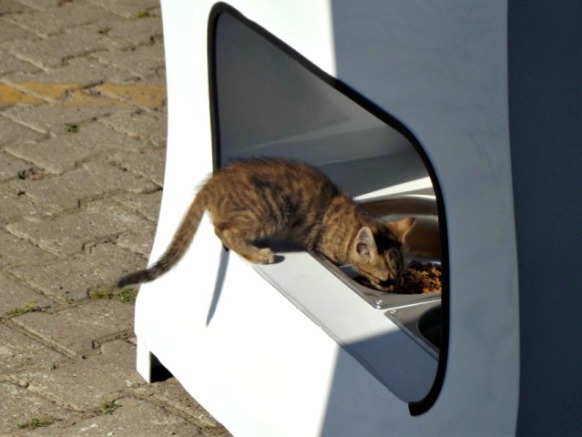 The complaints about the dogs and the concern for the threat of danger and disease they pose has led the Turkish government to create a law which requires the transport of thousands of stray dogs to a sort of wildlife park. This would remove them from the urban environment, but doesn't exactly remove the problem. It has been reported that dogs have even been the target of poisoning campaigns in the city.

While the Pugedon machines are commendable with their aim to provide stray animals with a better life, there may be some unintended consequences. I don't know about Istanbul, but where I live these machines would also be feeding a variety of wildlife -- such as rats, raccoons, foxes, and coyotes -- that would pose a greater potential for hazard to humans than stray pets. For the most part this could be remedied by the food compartment shutting down overnight.

Overall this is a great idea that can go a long way to helping stray animals cope with life on the streets. After all, a portion of these animals are just lost and trying to find their way home.

Is This Elephant Lion Or Lyin'?
Comments