U.S. Courthouses Going To The Dogs

Dogs have been trained to assist people in many ways. One way that you
may not have heard of before is as a courthouse dog. These dogs are
chosen for their low reactivity and ability to share this sense of calm 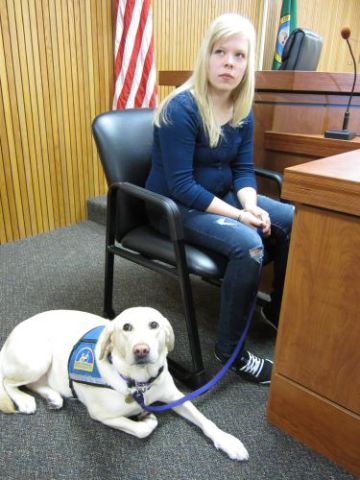 Courthouse Dog Assisting a Witness (Photo by DrMongrol/Creative Commons via Wikimedia)with victims and witnesses. This allows the individuals to give testimony that they
might otherwise be unable to share. The dogs are specially trained to help reduce the mental and emotional strain of being in court.

The duties of courthouse dogs has hardly been limited to just testimony in the courtroom. For a decade now the use of the dogs has become increasingly popular. They are also used to help comfort sexually abused children as they undergo forensic interviews, assist treatment court participants in their recovery, visit youth in detention facilities, and meet jurors. In addition to all of this, the dogs also interact with courthouse staffers who are often dealing with difficult and emotionally charged situations on a daily basis.

These dogs should be professionally trained by accredited service dog organization such as Canine Companions for Independence.  This training ensures that the dogs do not create a public hazard, and are stable and well-behaved in public. 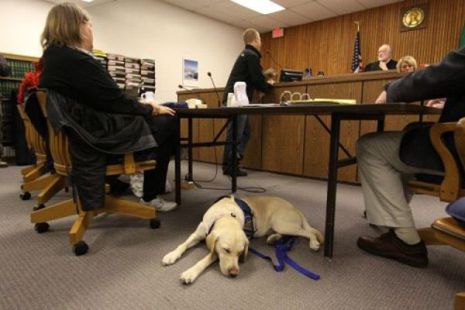 Courthouse Dog Assisting a Witness (Photo by Atsuko Otsuka/Creative Commons via Wikimedia)When on the job in the courthouse, the dogs are handled by professionals of the justice system, such as a police officer, a sheriff's deputy, a victim's advocate, or a forensic interviewer.

The first known instance of a dog being used in this sort of capacity appears to have occurred back in 1989 when Sheba, a retired seeing-eye dog assisted victims of child sexual abuse in the Special Victims Bureau  in Queens, NY.

The Courthouse Dog Foundation began in 2003 when Ellen O'Neill-Stephens, a deputy prosecuting attorney 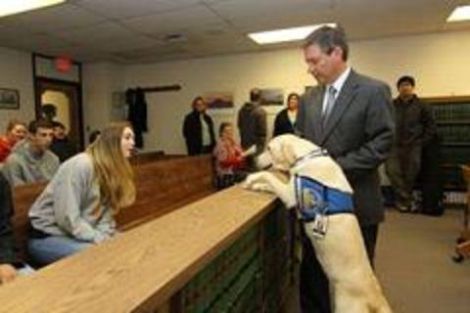 Courthouse Dog Assisting a Witness (Photo by Atsuko Otsuka/Creative Commons via Wikimedia)is Seattle brought home a service dog to help with her son with Cerebral Palsy. She saw how much the dog calmed her son and it got her thinking that the dog could be helpful on the job with victims confronting attackers and children testifying about terrible things. So she started taking Jeeter to work with her one day a week. Jeeter turned out to be so effective that O'Neill-Stephens' team adopted Ellie, a yellow Labrador retriever, to do the work full-time. O'Neill-Stephens started the organization Courthouse Dogs to educate justice workers about the impact dogs can have in court.

Seventeen states now have dogs to assist witnesses and victims within the legal system. O'Neill-Stephens is now retired from the legal profession and travels the country working to expand the use of courthouse dogs to additional jurisdictions. She says that it is her way of working to leave the judicial systems better than she found it.

The use of service dogs in courthouses continues to spread and even the skeptics are being turned into believers as they witness the good these animals are doing in this capacity.

Dogs
News Stories
Piper The Dog And His Own "Project Runway"

PetsLady's Pick: Cute Cozy Horse And Puppy Of The Day
This Dog Saved A Soldier And Gained A Forever Family -- The Animal Video Of The Day!!!
Comments