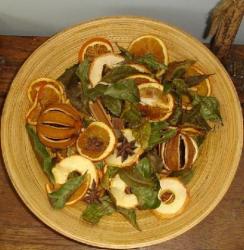 Today's column is devoted to a very dreadful occurrence. I, and other pet
bloggers, have been sent this notice by pet lovers we know... and the message
has been verified. Please read on...

Two beloved Cavaliers of mine, Haley and Zoe. both ate potpourri from a
decorative basket in my living room . Within hours, they were vomiting it,
convulsing and going into total body rigidity and shock. We took them to the
after hours clinic, they had no idea what it could be and wouldn't listen to me
about them vomiting potpourri at home and how I had such concerns about the
toxic effects of it. They treated symptoms. We transferred them to our day vet.
He also wouldn't listen to me about the potpourri theory. He said they had
"strychnine" poisoning symptoms. I kept telling him that the
potpourri was Made In India,
sold by a company in California
and sold at my local Wal-Mart.

My heart told me that it was the culprit of their condition. They
declined rapidly throughout the day and we transferred them back to the after
hours clinic for a second night. At midnight,
I made the agonizing decision to put them to sleep.

Haley was in constant seizures that wouldn't stop, fluid was filling up
in her lungs, body temp was dropping on both of them, Zoe was lying almost
lifeless on the table, struggling with every breath shetook. Every muscle was
completely rigid, you couldn't even move her.

I have devoted the last couple of days (now that I can get out of bed and
function) to researching my concerns with the potpourri and have since found
out I was right....... .....there is a lab in England that has case studies on
toxic potpourri from India!! The toxin....strychnine , which in its commercial
source, comes from a certain tree grown in India.
I am completely heart broken over this.

Please be aware of the potential toxins in any and all stuff like this in
our homes. I would've never guessed this could happen, but when I saw them both
"playing" in the potpourri and then after about two hours saw the
symptoms of a poisoning, I just put two and two together. Hug your babies, Love
them and always take lots of photos along the way...it helps later on, trust
me."

Note: The photo above is NOT the poisonous potpourri.

That's
the buzz for today...

Don't Kiss Your Pet Rats!
Your Faucet Can Be Your Cat's Best Friend