A few days ago, Petslady reported on the invasion of the Gulf of Mexico
by the lionfish, a species native to the Pacific that has been
increasing rapidly. In addition to the Gulf, they are also invading the
Caribbean and the Atlantic coast as far north as North Carolina. This
week the Florida Fish and Wildlife Conservation 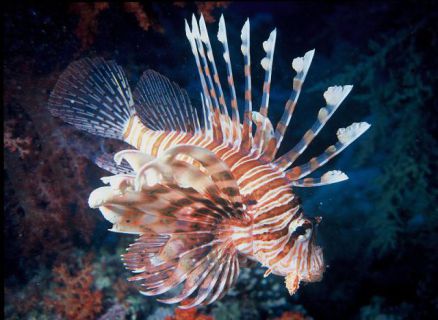 Harvesting invasive lionfish no longer requires a license when being caught with certain types of gear. This gear includes a pole spear, a Hawaiian sling, a
hand-held net or any spearing device that is specifically designed just for lionfish.

There is also no longer a limit to the number of fish caught by either leisure or commercial fishermen. These changes do not allow for spearing of the lionfish in areas where spearfishing is not allowed.

These changes have been made to encourage people to help reduce the population of the non-native invasive fish, which may pose a threat to native species. The lionfish has venomous spines and people should take care in handling the fish.

People spearfishing are asked to be careful to not damage the reef areas where the lionfish are usually found.