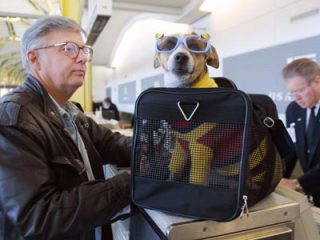 A dog in flight!: image via animals.howstuffworks.com How to fly with any of 10 dog breeds banned from United Airlines flights?  United has adopted Continental's PetSafe program from Continental Airlines, which was fully taken over last month.  While PetSafe has set some wise rules for canine travel, it also restricts certain dogs from flying based solely on their breeds.

The breeds, once called 'dangerous,' now not called anything, but still forbidden from flying are: the pit bull terrier, American Staffordshire terrier, ca de bou, cane corso, dogo
Argentino, fila Brasileiro, perro de presa canario, presa canario and tosa (or
tosa ken). Most of the dogs listed have their origins in Europe and South America and are large working dogs.

Thanks to Change.org, the word 'dangerous' was removed from United's policy, but the organization wants a lot more.  It is petitioning United to remove the restriction on all dogs.  If you wish to sign the petition, you can find it on the site

On the positive side, the PetSafe program provides special accommodations for traveling pets, including climate controlled vehicles driving them back and forth from the airport to the aircraft, temperature-controlled cargo compartments, and pet tracking ability from departure to destination. Certain breeds, particularly those with respiratory difficulties, are given special treatment when they travel.

United is hoping to be a leader in pet transportation with its PetSafe program.  According to the Department of Transportation, last year there were 46 problems reported for pets on airlines, including
35 animal deaths, nine injuries and two lost pets.