Two Cats On A Raft

Is it crazy to try to sail the Atlantic on a raft? Maybe. Is it nuts to
take such a chance? Perhaps. Is it totally insane to take two kittens
with you for the trip? Yep! All of this actually happened in 1956
when a raft named the L'Égaré 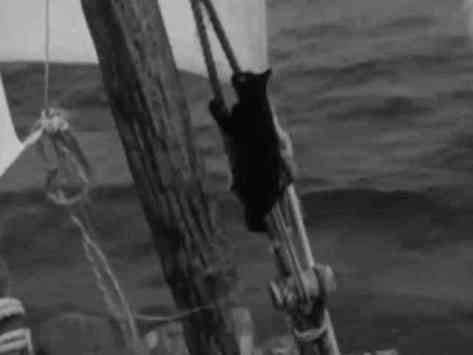 Puce climbing the rigging (You Tube Image) II was towed out of the harbor at Halifax,
Nova Scotia and set adrift with four men and two cats on board. The
feline crew members were Puce and Guiton.

The trip was the idea of Henri Beaudout who believed that it was possible for a raft to make it across the Atlantic Ocean traveling west to east using only wind and currents. His first attempt, with the L'Égaré I ended in disappointment when the raft was smashed against the rocks along the coast of Newfoundland.

The man was undaunted and immediately began making plans for L'Égaré II. The raft was 13' x 17', had a small sail of Egyptian cotton, and a tiny cabin that would sleep three men at a time (two in hammocks, one on the floor). 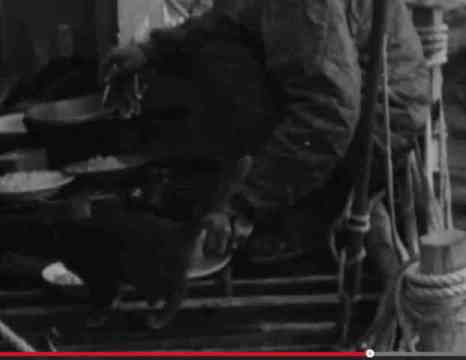 Guiton awaits dinner (You Tube Image)The raft took off on its adventure on May 24, 1956. Draftsman Gaston Vanackere acted as the voyages documentarian and was equipped with a 16mm camera and a rubber raft to film from a distance.

Puce was the black kitty and his sister, Guiton, was the gray cat. The pair contributed a great deal of comfort, companionship, and entertainment to the remaining crewmembers after one, Jose Martinez, was sent home on a 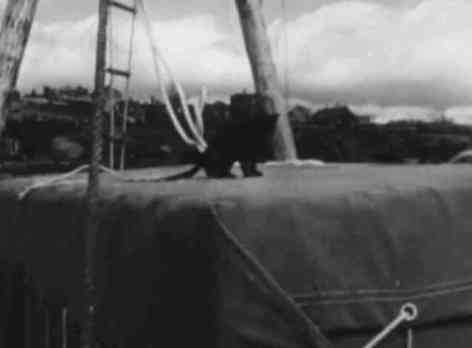 Puce sitting on top of the raft's cabin (You Tube Image)fishing boat after suffering severe seasickness. Even during the times when rations became desperately short, the men made sure that the felines were fed regularly. The supplies they had brought along were occasionally supplemented by fish and gulls, both of which the men were not terribly successful at catching.

During rough weather the cats were confined to a small box, but for the most part they spent their time climbing the rigging, playing, scampering, and sleeping like any other cats. With the boisterous play of the kittens would occasionally lead to one or the other falling in the drink. It was an occurrence that they took in stride. They would swim back to the raft and claw their way back on board. The kittens were fearless when it came to life on the raft, but when they finally arrived in Cornwall, England, in August of 1957 the cheering, admiring crowds terrified them with all of the noise and press of people. While there is no word on what happened to the kittens immadiately after reaching England, it is supposed that they spent six months in quarantine, which was required of all animals at the time.

The cats never returned to North America. Instead they were adopted by the Duke of Bedford, a cousin of Queen Elizabeth II, after he had invited the crew for a visit. The cats lived out their lives in luxury on the Duke's country estate.