Two Purple Hearts For Hero Solider and His Military Dog

The bond between a soldier and military service dog transcends time and space and is unbreakable. Perhaps it is the proximity of death lurking around every dark corner that conjoins souls like nothing else, but whatever it is, that communion never dies, even long after the danger is past. Meet Specialist, Andrew Brown, of the 89th Military Brigade, and his 'comrade-in-paws', Sergeant Rocky, two brave veterans who served side by side in the war in Afghanistan.

Last December, this valiant pair was on a patrol just like many other missions they had completed together over the course of the last two years. Sergeant Rocky identified an IED on a compound in Afghanistan, which was successfully detonated. It was while they were walking away from the explosive that another device went off, seriously injuring SPC Brown and Rocky's tail, left leg and pelvis. Both were flown together to Kandahar, Afghanistan, where they were awarded Purple Hearts for their injuries. 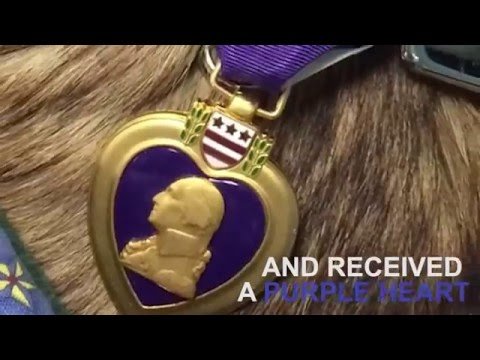 Initially, the two were cared for in the same hospital room and in THE SAME BED, but then they went their separate ways for three months while undergoing therapy. Brown was sent to Walter Reed National Military Medical Center in Washington, D.C. while Rocky was transported to Dog Center Europe in Germany, where according to Stars and Stripes, he underwent 4,000 hours of surgery, medical care and physiotherapy.

When an ABC reporter interviewing Dr. Lane Hansen, an army veterinary surgeon, crassly mentioned that the cost of so much care had to be enormous and was a lot to spend on a dog, Hansen relied without hesitation: "Rocky is worth it. He's an asset, as a military working dog who is capable and comfortable and skilled at doing his job."

Would the two comrades ever cross paths again? No one knew for sure at the time, but that day did come in March of 2016. The touching reunion took place in Bethesda, Maryland. Rocky's tail was still injured, but it wagged with delight at the sight of his former companion. His undying love and devotion for his human buddy was implacable and as deep as it had ever been. They say a picture is worth a thousand words. Perhaps the image below figures somewhere around one million. 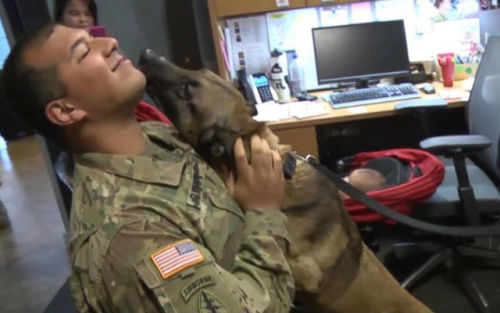 In an interview with ABC news, Brown said: "I just feel excitement. It's the only way I can describe it. " He also said that the dog should get most of the credit for their performance in the battlefield. "Rocky does everything. I'm really just a guy with a leash. I bring him to the area and let him do his thing. If he responds, I translate that...let them know my dog got a response right here." Brown told the press that military dogs are always given a rank above their handlers out of respect for the death-defying work that they do.

Today, both heroes are doing well, but their military futures are uncertain. Brown is not sure when he will return to active duty. Whether or not Rocky is deemed fit to continue to serve, Brown is prepared to adopt this incredible dog, who is already a big part of his family unit, which consists of wife, Kayla, and two small boys.

In his own words: "I've known him longer than my two sons have been alive. I think we make a pretty good  team – you know, you've got to have 100 percent trust in your dog." 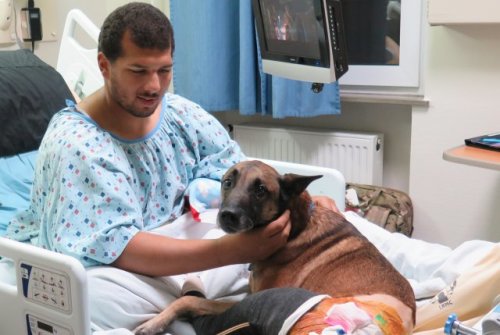 Thus be it ever for Andrew Brown and Sergeant Rocky, two American heroes.

SEE MORE: The Amazing Story of Lucca: A Military Service Dog For All Seasons