Technology allows us to get a lot done around the house even when we aren't at home.  We can check our security systems while on the subway, DVR the latest game while out to lunch, check our home phone messages from the office, and even make sure the lights are off while we are out having dinner.  But can we now give our dogs a bone even when we aren't home?  Dog owner, Nat Morris, can!  In fact anyone with a twitter account can give Morris' dog a bone without having to travel to his home in west Wales.

The Wales resident started the idea by creating a twitter page for his dog Toby.  From there Morris, an IT consultant, created an invention that drops a bone into Toby's dog dish when he gets a tweet that says @FeedToby.   All Morris has to do is fill the feeder up with dog biscuits before leaving the house.  When a tweet comes through to Toby's page a computer starts the motor of the machine.  The motor pulls a trap door open and a dog biscuit is released into Toby's dog dish.  The dog owner even made sure to have a buzzer sound off every time a biscuit is dispensed so the dog doesn't miss a chance to get a treat.  To add to the fun, a camera is set up to send tweeters a photo of Toby successfully receiving the "tweet treat". 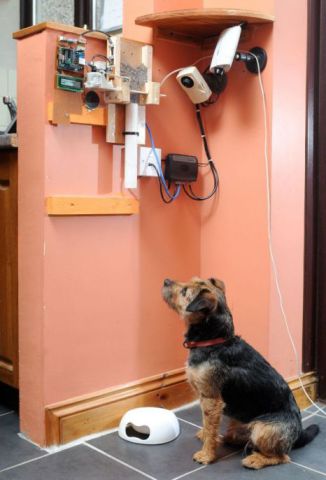 Mr. Morris said he was inspired to create the invention due to his long hours away from his dog while at work.  Toby now has over eight thousand followers and never goes long without a treat.  The popularity of the twitter page has forced Morris to put some further restrictions on the tweets to keep Toby's diet in check.  Toby can now only get a "tweet treat" every fifteen minutes from nine in the morning through nine in the evening.  Toby was getting treats at all hours of the night, but now tweeters will get a message after nine at night that indicates the dog is sleeping.

Since users around the world are interested in Toby's page Morris is thinking about patenting the invention.  He is even thinking of an updated version that would include a scale that weighs Toby before he gets fed.  This would help him keep tabs on the puppy's weight.

As for Toby, he is a happy dog!  At first he didn't know what to think of the device, but his owner says he absolutely loves it now.  Morris can now check in by going to the twitter page where he usually finds pictures of Toby wagging his tail at the sound of the "tweet treat" buzzer! 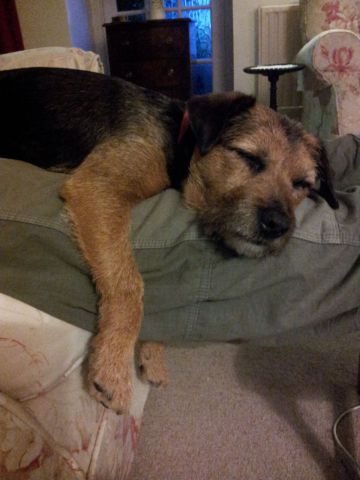 Toby gets a good nights rest after a day full of treats!: via Twitter

Dogs
Fun
Fun Stories
News Stories
Technology
Weird, Odd or Bizarre
Pet Boarding For The Holidays Offer All-Inclusive Packages
Hunting Or Hip: Dogs Can All Dig The Lost Camo Collar & Leash
Why Risk Packaged Dog Jerky When You Can Make It Yourself - Easily!
The Dogs Of The Mayflower
Comments