A wild turkey may have been making a preemptive strike for turkeys
everywhere several days ago when it apparently flew into some power
lines, leaving a portion of southeastern Wisconsin without power. About
1,500 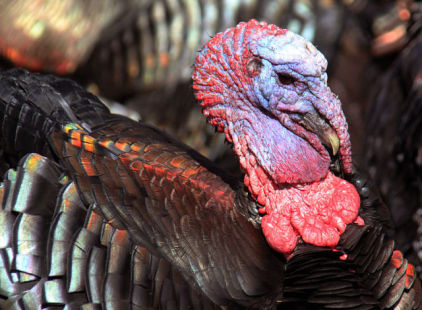 Wild Turkey (Photo by Malene Thyssen/Creative Commons via Wikimedia) people were affected by the outage that was reported on November
17.

While have some have suggested that this was a preemptive strike against Thanksgiving, others say it was just an accident.

While most people believe that turkeys cannot fly, this is only true of the domesticated varieties. Wild turkeys are able to fly for up to a quarter of a mile at a shot, though they usually stay close to the ground. The primary use of their flight skills is to find a branch among the treeson which to perch.

Power was restored to most of the residents within a couple of hours.  There is no word on the condition of the turkey, but it is guessed that he was totally fried.

You'll Be "Raven" About This Wristrap!

Giant Bird Attacks Traffic! The Animal Video Of The Day!!!